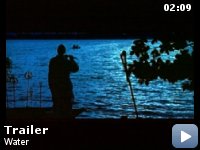 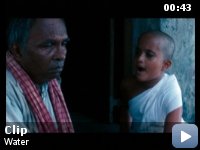 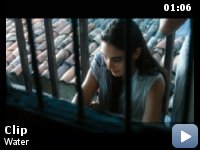 The film examines the plight of a group of widows forced into poverty at a temple in the holy city of Varanasi. It focuses on a relationship between one of the widows, who wants to escape the social restrictions imposed on widows, and a man who is from the highest caste and a follower of Mahatma Gandhi.

Storyline
A thesis picture. In 1938, Gandhi's party is making inroads in women's rights. Chuyia, a child already married but living with her parents, becomes a widow. By tradition, she is unceremoniously left at a bare and impoverished widows' ashram, beside the Ganges during monsoon season. The ashram's leader pimps out Kalyani, a young and beautiful widow, for household funds. Narayan, a follower of Gandhi, falls in love with her. Can she break with tradition and religious teaching to marry him? The ashram's moral center is Shakuntala, deeply religious but conflicted about her fate. Can she protect Kalyani or Chuyia? Amid all this water, is rebirth possible or does tradition drown all?

For the role of Chuyia, Mehta auditioned 50 girls.

Continuity:
Kalyani's dog appears older in the scene in which it escapes than the next time it is shown.

Narayana:
All the old traditions are dying out.

Kalyani:
But what is good should not die out.

Narayana:
And who will decide what is good and what is not?


This beautiful and poignant film also packs quite a punch; the sorry
plight of Hindu widows in traditional Indian society is made evident.
Deepa Mehta has clearly set out to make a film with a message but she
lets the story carry the message and she does not demonize the
supporters of ancient oppressive practices, some of whom are motivated
by faith rather than self-interest. Strangely the film's beauty
undercuts to some extent the political message: I can imagine a devout
Hindu seeing it as supporting the traditional view.

As explained in the film, according to ancient texts a Hindu widow had
three choices; she could join her husband on his funeral pyre, she
could marry his younger brother (if available) or she could go into an
Ashram (refuge) with other widows and live a life of self-denial to
atone for the sin of having lost her husband.. It is the third option
Chuyia (Sarala) takes on the death of her husband in 1938. Chuyia
however is only nine years old and scarcely remembers getting married.

The Ashram is a poor place, self-supported by the proceeds of begging
and prostitution, but there is camaraderie amongst the women (who are
of all ages) and Chuyia, initially, is not badly treated. The focus
shifts to Kalyani (Lisa Ray) the Ashram's "jewel" who becomes involved
with a young political activist Narayana (John Abraham), a supporter of
Gandhi.

The film is not so much an attack on religion as on particular beliefs.
I've no doubt one could live the life of a devout Hindu without
believing that widows are responsible for their husband's deaths just
as one can be a devout Christian without believing in slavery, or that
the earth is flat, or was created in 4004BC. Although the film is set
just prior to World War 2 there are undoubtedly many supporters of the
ancient texts still out there – Mehta was prevented from filming in
India by some of them and "Water" was eventually filmed in Sri Lanka. I
find it impossible to have any sympathy for their position because it
really amounts to using the practices of a society which has long
passed away to defend an economic interest, or rather to excuse the
abandonment by her family of a woman who has had the ill-luck to lose
her husband. As Chuyia asks, where is the Ashram for the widowers?
Also, whatever could be said for child marriage on social or economic
grounds 2000 years ago, there is no possible justification for it now.

It's a great pity the film was banned in India and Pakistan – it is a
film for the citizens of those countries rather than me, but it is
striking to watch and I suspect, not easy to forget.