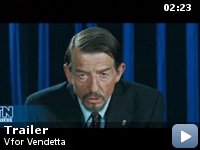 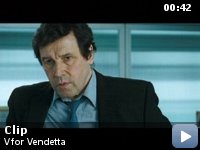 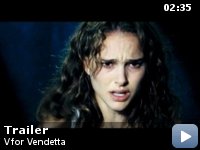 A shadowy freedom fighter known only as "V" uses terrorist tactics to fight against his totalitarian society. Upon rescuing a girl from the secret police, he also finds his best chance at having an ally.

Storyline
The futuristic tale unfolds in a Great Britain that's a fascist state. A freedom fighter known as V uses terrorist tactics to fight the oppressive society. He rescues a young woman from the secret police, and she becomes his unlikely ally.

Among the paintings in V's lair are Waterhouse's "The Lady of Shalott", "Puberty" by Edvard Munch, "Bacchus and Ariadne" by Titian, and "Elohim Creating Adam" by William Blake.

Continuity:
When Evey is polishing the mirror, the amount of dust varies between the shots.


I was a fan of the "V for Vendetta" graphic novel, and Alan Moore
disinheriting the film was a bit discouraging. But he's always been a
little crazy. The film version is everything I could have possibly
hoped for – gripping, chilling, intense, exciting, heartbreaking. It
gets Moore's music if not his exact words; elements are slightly
different, subplots removed. But the idea – as V himself would be so
proud to say – remains the same.


The plot is surprisingly complex and nuanced, and I don't want to give
anything more away than the previews already have. Suffice it to say
that a masked anarchist (voiced by Hugo Weaving) must save a young
woman (Natalie Portman) during his attempt to expose corruption in the
government. Weaving is perfectly cast, using his formidable physicality
and imposing voice to give gravitas to the insanity of the character.
Portman has gone from child to teen star and is finally emerging as a
talented, adult actress following her Oscar-nominated turn in "Closer".
Here, she gives her best performance to date as the orphan Evey. John
Hurt is characteristically impressive as the enigmatic government
leader, and Stephen Rea gives a wonderful supporting turn as the police
inspector charged with finding V – before it's too late.

The Wachowski Brothers' former protégé, James McTiegue, takes on the
directing duties here and helms an enormously impressive first feature,
using every trick in the book in a manner reminiscent of his mentors'
breakout hit "The Matrix". Unlike "The Matrix", McTiegue allows the
story to be more of a focus than the action, and as a result the film
is a tense and emotional thriller, with outbursts of spectacularly
filmed and choreographed action. Showing more maturity and restraint
than the Wachowskis, McTiegue doesn't show off, and his trickery isn't
self conscious. When slow-motion overtakes a late action sequence, it
seems as natural as breathing. The late cinematographer Adrian Biddle
(the film is dedicated to his memory) does an outstanding job,
Oscar-nominated Dario Marianelli's score is a fantastic accompaniment
to the piece, and the visual effects are astonishing, terrifying, and
deeply moving, especially in the climatic moments in Trafalgar Square.

With solid acting, great action, and fantastic technical wizardry, it
sounds just like another "Matrix"-style ripoff. But the biggest
difference in "V" is that it is a story of real ideas – not a
fantastic, science fiction creation, but a genuine examination of the
human condition. The power of fear takes center stage here – the fear
of war, of disease, of famine. Fear is a basic human nature, and has
been exploited as a weapon – a method of control – for centuries. And
for those who would use it, a masked man waits in the shadows to carry
out your sentence. The verdict? Vengeance. "V for Vendetta" is a
must-see.

TagsEngland London UK
Renaissance
The Lives of Others