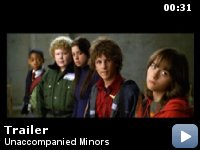 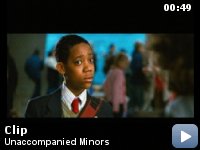 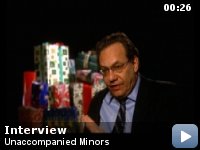 A group of unaccompanied minors bond while snowed in at the midwestern Hoover International Airport during the holiday season and ultimately create a makeshift holiday themselves.

Storyline
Spencer and his little sister, Katherine, are flying to Pennsylvania for Christmas with their dad. While changing planes, a blizzard moves in and cancels all flights out of Hoover Airport: they must stay in a basement room with the other unaccompanied minors. Spencer and four others – a chubby boy, a non-stop-talker, a surly girl, and a rich kid – go AWOL and get in trouble with Mr. Porter, the Christmas-hating airport supervisor. The five misfits spend the night evading and enduring Porter's punishments, discovering all sorts of things in back rooms, making sure Katherine gets her visit from Santa, and finding among themselves a new kind of family.

Taglines:
No plane, no parents, no problem!

Baggage Handler:
[teasing the caged barking dog]
No Christmas dinner for you, Cujo!


I just watched this movie and I really don't understand why people
think this is a horrible movie. It's a good movie, I really enjoyed it!
Sure, there isn't some complex plot with several twists; it's just a
relaxed ride, a feel good movie. It's un-complex. As un-complex as
children ARE. You remember how good live was when you were young? No
worries (well, for most people that's true anyway ;). The things the
kids in this movie do are things that you CAN only do when you are
still young: the adults are going to forgive you. They are doing things
that no adult could ever get away with, but that is exactly why it made
me feel good: you just know that there won't be consequences; it's just
pure adventure and fun.

I see a lot of B-movies lately; were the acting is REALLY REALLY bad.
The kind of movies that I turn off half way, disgusted that I wasted my
time with it. Imho, THAT are the kind of movies that should fill up the
bottom 250 on IMDb. The acting in this movie however, is good! The kids
put down some professional acting (not perfect, but in most cases that
is totally to blame on the director– the movie doesn't need it either,
this isn't a "The Good Son (1993)") and the adults act as adults
typically act in kids movies, nothing that annoyed me.

I think that any adult can enjoy this movie, if they keep an open mind,
like children and still are enough of a kid in their heart to remember
how (good) it was in their childhood.

Don't expect anything deep – just sit back and allow yourself to enjoy
a while without worries.