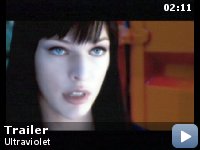 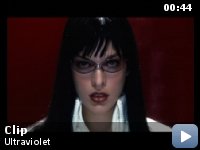 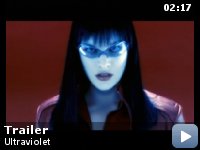 A beautiful hemophage infected with a virus that gives her superhuman powers has to protect a boy in a futuristic world, who is thought to be carrying antigens that would destroy all hemophages.

Storyline
Set in the late 21st century, a subculture of humans have emerged who have been modified genetically by a vampire-like disease, giving them enhanced speed, incredible stamina and acute intelligence, and as they are set apart from "normal" and "healthy" humans, the world is pushed to the brink of worldwide civil war aimed at the destruction of the "diseased" population. In the middle of this crossed-fire is – an infected beautiful woman – Ultraviolet, who finds herself protecting a nine-year-old boy who has been marked for death by the human government as he is believed to be a threat to humans.

Taglines:
The Blood War is On

While on the set, Kurt Wimmer asked Milla Jovovich to punch him, in order to get a feel for the intensity she was putting in her action sequences. For the next several days, Wimmer directed the film with a black eye.

Continuity:
Nearing the end of the film, Violet infiltrates the complex and makes her way into a white room with tons of men in white suits. She starts fighting them and when a couple of guys come at her, she moves quickly and one guy stabs the other in the chest/gut. Now she goes to elbow one of the guys in the face, watch his helmet, it comes flying off, revealing his head and hair. Then the camera quickly changes to another angle, the helmet is perfect on straight.

Violet:
Hello. My name is Violet and I was born into a world you may not understand.


This movie is absolutely horrible. The magnitude of its suck is
unbelievable. The characters in the movie are very poorly developed so
when you are quickly put into a silent emotional scene, you're left
unaffected. The movie takes place in the future so they add in all
kinda of high-tech gadgets that are so stupidly unrealistic it makes
you laugh. They try to incorporate unbelievable advanced technology
with a more modern day looking setting so the two aspects clash. They
can make weapons materialize in their hands but their form of infection
control is still rubber gloves. The plot itself is kind of hard to
follow and doesn't seem to make any sense at times. How vampires fit
into the movie, i have no idea.I signed up to IMDb for the sole purpose
of warning anyone who wants to see this movie. This movie was horrible
and do not waste a dime on this movie. The only delight i got from this
movie is watching the fine Milia Jovovich dance around in skin tight
outfits. I cannot stress how awful this movie is. Don't waste your time
or money on this film!