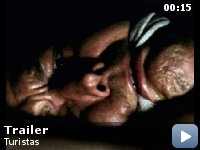 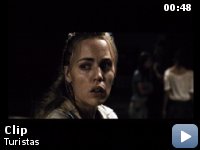 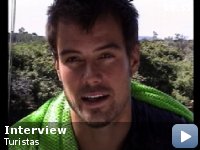 A group of young backpackers' vacation turns sour when a bus accident leaves them marooned in a remote Brazilian rural area that holds an ominous secret.

Storyline
While traveling on vacation through the country of Northeastern of Brazil by bus, the American Alex Trubituan, his sister Bea Tribituan and their friend Amy Harrington meet the also foreigners Pru Stagler, Finn Davies and Liam Kuller after an accident with their bus. They follow a track through the woods and find a hidden paradisiacal beach. They decide to stay in the place drinking beer and dancing funk and parting with the locals and they meet the amicable Brazilian teenager Kiko. They are drugged with "Boa Noite, Cinderela" (Ruffies, literal translation: "Good Night, Cinderella" – a trick used by smalltime crooks to steal naive people) and when they wake up, they are practically naked, with all their belongings, clothes, money, jewels, passports, backpacks etc. stolen. They walk to a small village trying to find a police station, they get into trouble with the dwellers and they are helped by their acquaintance Kiko…

Taglines:
There are some places tourists should never go

Melissa George learned how to speak Portuguese so she could play Pru in this film.

Audio/visual unsynchronized:
At the end of the movie, a Cessna Caravan pulls up and shuts its engine down. The sound is that of a piston engine and not the Caravans own turbine engine. The same piston engine can be heard as the aircraft takes off in a later scene.

Bea Trubituan:
[careening recklessly through the countryside in a bus]
Are you having fun?

Alex Trubituan:
Am I the only one having a problem with this?

Bea Trubituan:
I don't know, I guess I'm used to it.

Alex Trubituan:
I just keep thinking about how far we must be from a hospital. You know, with doctors who operate instead of amputate?

Alex Trubituan:
[grinding sounds]
Would you slow the fuck down!

It wasn't that bad!


I just saw this and I had extraordinarily low expectations, but I
actually enjoyed it a lot more than I thought it would.

I thought the "Scarier than Hostel!" bit that they were using to
promote it was corny and dumb, because a lot of people, including me,
hated Hostel. But Turistas is better viewed when you're not expecting
it to be that great. There were a few parts I thought were somewhat
dumb, but the acting isn't bad. All of the actors are in their late
20's to early 30's, which I thought was good because I did NOT want to
see another dumb teen-driven horror flick. But I don't see Turistas as
a horror movie. It was a thriller that was actually somewhat scary,
which is something that suspense movies these days lack terribly.

The parts I didn't like about it were overlookable. Like in the
underwater scenes, I thought the acting could have been a little
better, but in the long run, Turistas isn't a failure. I think there
are much worse movies that could be on the Bottom 100, like Lady In The
Water, for example. So, if Turistas is showing now at a 2nd-run house
near you, you should go see it. Hopefully you won't hate it as much as
typical IMDb folk do. They're all idiots, anyway.