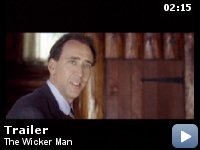 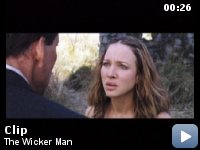 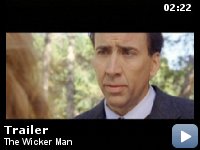 A sheriff investigating the disappearance of a young girl from a small island discovers there's a larger mystery to solve among the island's secretive, neo-pagan community.

Storyline
While recovering from a tragic accident on the road, the patrolman Edward Malus receives a letter from his former fiancée Willow, who left him years ago without any explanation, telling that her daughter Rowan is missing. Edward travels to the private island of Summerisle, where Willow lives in an odd community that plant fruits, and she reveals that Rowan is actually their daughter. Along his investigation with the hostile and unhelpful dwellers, Edward discloses that the locals are pagans, practicing old rituals to improve their harvest, and Rowan is probably alive and being prepared to be sacrificed. When he locates the girl, he finds also the dark truth about the wicker man.

Taglines:
Some Sacrifices Must Be Made

Continuity:
When Malus first lands on the island his hair is mussed and he is very sweaty. The next instant his hair is neatly combed and he has a fresh makeup job.

Edward Malus:
[a cracking sound is heard]
Ahhh, my legs!

The True Nature of Sacrifice

Prior to this release, Neil LaBute had this to say about the 1973
original: "It's surprising how many people say it's their favorite
soundtrack. I'm like, come on! You may not like the new one, but if
that's your favorite soundtrack, I don't know if I *want* you to like
my film."

Neil, a word. You might want to sit down for this too; as Lord
Summerisle says, shocks are so much better absorbed with the knees
bent. See, Neil, the thing about the original, is that Paul Giovanni's
soundtrack is one of the most celebrated things about it. The
filmmakers themselves consider it a virtual musical. Along with Richard
and Danny Thompson, and Bert Jansch, it practically kick-started the
1970s Folk New Wave. To undermine it is akin to imagining Jaws without
John Williams. Or The Buddy Holly Story without Buddy Holly. The
result's one of the most breathtakingly arrogant, pointless remake of a
British cult classic since Sly Stallone's Get Carter.

The original had apparently left Nicolas Cage "disturbed for about two
weeks." So disturbed, during that fortnight's window, that he pitched
the idea of re-imagining one of the most nuanced films about
inter-faith struggle ever devised to a writer-director previously known
for his wholly unsubtle depictions of male chauvinism. It's like some
parlor game: what would you get if Sam Peckinpah took on Bambi? Or
Gaspar "Irreversible" Noe remade Love, Actually?(Actually, I'd quite
like to see that). Unfortunately, someone took this parlor game
seriously: All LaBute's succeeded in doing is ripping out the
original's guts while saddling it with his own gormless Sex War
preoccupations.

After failing to rescue a little girl and her mum from a fatal car
crash, Cage's highway patrolman spirals into a medicated torpor. Then
he receives a letter from ex-fiancée Willow Woodward (this one trades
on name-homages for kudos), now living on the private island community
of Summersisle – that extra 's' stands for 'superfluous' – and wants
Edward to help locate missing daughter Rowan.

Summersisle, it transpires, is a female-dominated joint, conceived as a
haven for oppressed womenfolk and refugees from the Salem witch trials.
Here, the matriarchs observe the Olde ways, and the few males are
near-mute breed-mules. It's like Lilith Fair on a grand scale.
Summersisle's main export is honey – a symbolic and literal headache
for Edward, as he's allergic to bees. "Beekeepers!" cries Edward. "They
seem to be everywhere on this island!" Well, that's probably because
Summersisle's main export is honey.

While making his investigations, Edward overhears of an oncoming Mayday
ritual called "the time of death and rebirth". He discovers the
previous year's crop failed; nearly dies from bee stings; and
eventually comes to the conclusion (a conclusion which admittedly
couldn't be more obvious if the locals had tattooed a timetable of
events on the back of his hands) that Rowan will be burnt alive in a
pagan rite to ensure a bountiful harvest. He also meets the Queen Bee
of the hive, Sister Summersisle (Burstyn), who has her own plans for
him involving the eponymous Wicker Man: "The drone must die."

First, the good news: any concerns Cage would be airlifted from the
Wicker Man's flaming jaws at the last minute by a fleet of black CIA
helicopters can be laid to rest: he toast. That's about it for the good
news. "This is a story whose chapters were carefully written" intones
Burstyn with sublime irony. Though retaining the basic cat-and-mouse
premise (and credits typography), what's left subjects the original to
a scorched-earth policy.

Crucial to Shaffer's original screenplay was that his Christian copper,
in accordance with ritual, came to the island of his own free will –
and most importantly, was a virgin; the perfect sacrifice. In reducing
matters to a sexual, as opposed to a religious power-struggle, LaBute
presents the flimsiest of qualifiers for a harvest sacrifice. By the
time Cage has worked out he was the bait, you honestly couldn't care
less.

And Cage is one of the very worst things in this; a lumbering, drawling
donkey – an arsewit whose tongue seems just slightly too big for his
mouth. "Goddamit" he moans after he hallucinates a drowned Rowan, with
all the mental torment of a man who's set his morning alarm clock
half-an-hour too early. One hopes it's his character's frequent
reliance on pills that has reduced him to this state – alternately
fatigued, then full of preppy, overbearing vim. If so, it's a fine
portrayal of an undistinguished IQ addled with anti-depressants. If
not…it doesn't bear thinking about. As Willow, the saucer-eyed Beahan
is similarly dreadful, presenting her lines as if in competition with
Cage for the…most…half-hearted…delivery. While Burstyn entirely lacks
the mercurial menace to convince. Who's afraid of Naomi Wolf?

Every element that made the original great – the lovingly detailed
depictions of folk customs, the ingenious score, the dialogue (Lord
Summerisle's majestic "You did it beautifully!" has been replaced with
the rather less attractive "You did it excellently!" Whoah, dude!) –
have been substituted for a meandering battle-of-the-sexes thriller
with occasional crash-bang wallop. Namely, walloping women; this is a
LaBute flick, after all. Cage's Sister Beech bashing is just one of the
more embarrassing episodes; impotent little men will be hooting with
glee at how them uppity hippie chicks finally got what was comin' to
'em, hyuk hyuk.

The closing coda sees the whole rotten mess collapsing under the weight
of genre cliché: in a bar, two guys run into a couple of Summersisle
maidens on shore leave, flirty-fishing for fresh martyrs. At the moment
of their successful pick-up, you half expect the women to turn round
and give an exaggerated wink and a thumbs up to the camera.

One more thing: keen credit watchers may have noticed that films
sporting an unusually high producer count (anything up to 10) tend to
be Not Much Cop. The Wicker Man has 18 producers in total.