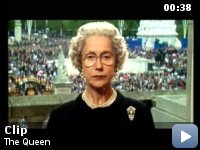 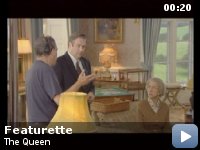 After the death of Princess Diana, HRM Queen Elizabeth II struggles with her reaction to a sequence of events nobody could have predicted.

Storyline
Diana the 'People's Princess' has died in a car accident in Paris. The Queen and her family decide that for the best, they should remain hidden behind the closed doors of Balmoral Castle. The heartbroken public do not understand and request that the Queen comforts her people. This also puts pressure on newly elected Tony Blair, who constantly tries to convince the monarchy to address the public.

Taglines:
Tradition Prepared Her. Change Will Define Her.

Helen Mirren arranged for the actors playing members of the Royal family, specifically James Cromwell, Sylvia Syms and Alex Jennings to spend a lot of time together off camera. This was done so that they would feel comfortable with each other like a real family.

Anachronisms:
When Tony Blair receives a call from Lord Chamberlain in his car you can see the new shaped S Class driving behind him. This shape was no introduced until 1999, and the film is set in 1997.

Reporter:
After weeks of campaigning on the road, Tony Blair and his family finally strolled the few hundred yards to the polling station this election day morning. Amongst the Labour faithful up and down the country, there is an enormous sense of pride in Mr. Blair's achievements, and the confidence that he is about to become the youngest prime minister this century.


Let's start by saying that the film itself is a perfect reflection of
the days we live in. A deep human drama with a tabloid sensibility. A
tradition that's lasted over a thousand years shaken by a world who
demands public spectacle. Humbleness or humiliation? Asks Queen
Elizabeth to her Prime Minister. Talk Show audiences wouldn't know the
difference and we are all, one way or another, talk show audiences.
From Jerry Springer to Oprah Winfrey. How did it really feel like? We
all want to know, we all want to see the sorrow, the confession or the
denial on the catch of the day's face. Michael Sheen is a adorable, yes
I think adorable is the right word, as Tony Blair, the labor link
between the people and the monarchy. Helen McCrory as Mrs Blair is
another standout. Just look at her walking backwards trying to to be
true to royal protocol. I had to adjust to the fact that the Queen
Mother was played by Sylvia Syms. Sylvia Syms! Queen Mom, a wonderful
old battleship who's seen it all and fought her entire life for things
to change so they could stay the same. It is however Helen Mirren, in a
performance that could only be described as miraculous, that takes us
body and soul through the painful ordeal of those seven days
surrounding the death of Princess Diana, the "people's princess" a
natural master in a world of tabloids and self humiliation disguised as
humbleness. Helen Mirren gives us more than a glimpse into the hermetic
heart of a living queen. Not a single false note, not a single cheap
shot. A performance that is as poignant as it is entertaining. I was as
besotted with Helen's Queen as her Labor Prime Minister was. I can't
wait to meet her again.