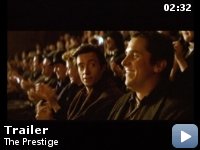 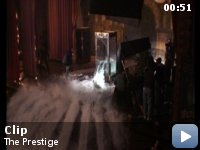 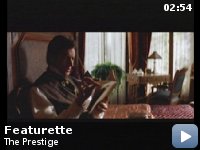 The rivalry between two magicians is exacerbated when one of them performs the ultimate illusion.

Storyline
In the end of the Nineteenth Century, in London, Robert Angier, his beloved wife Julia McCullough and Alfred Borden are friends and assistants of a magician. When Julia accidentally dies during a performance, Robert blames Alfred for her death and they become enemies. Both become famous and rival magicians, sabotaging the performance of the other on the stage. When Alfred performs a successful trick, Robert becomes obsessed trying to disclose the secret of his competitor with tragic consequences.

Taglines:
A Friendship That Became a Rivalry.

Revealing mistakes:
Near the end of Cutter"s Summation, Alfred Borden picks up his daughter with left arm. It is very quick camera shot, but all five fingers are revealed.

Alfred Borden:
Are you watching closely?


What "The Prestige" does very well is recreate a period of show
business history near the turn of the century in which competition
between magicians was serious and intense. The workings of the
complicated illusions are gorgeously brought to life via smartly
detailed apparatus that replicate the actual mechanics of Victorian
legerdemain.

Much of the film rings very true, such as the all-consuming obsessions
of the lead characters to be the best and outdo all others. It's an
easy step to accept that such unwavering determination spills over into
deadly territory, as rival magicians suave Rupert Angier (a riveting
performance by Hugh Jackman) and audacious Alfred Borden (Christian
Bale effortlessly playing a brooding lower-class Brit) each seek to
wreak continuing revenge upon the other.

The story, though adapted from a novel, feels like a perfect fit for
director Nolan's sensibilities, as the machinations of the two men
become increasingly convoluted during a back-and-forth tug of wits that
keeps you guessing in the style of Nolan's "Memento." As the game grows
increasingly deadly, and threatens to consume all they love, the film
becomes a fascinating study in single-mindedness.

The work is epic in sweep, beautifully filmed, and strongly acted. The
only odd note in casting is David Bowie as Nikola Tesla (he looks
nothing like the actual Tesla, if you care about these sort of things,
and his appearance calls attention to itself as superstar casting often
does), but Mr. Bowie holds his own. Solid performances are all around,
with Michael Caine adding dignity and depth as the old master, Scarlett
Johanssen as the as the lovely stage assistant who becomes the third
point in a twisted love triangle, and even Andy Serkis (Gollum!) in a
memorable supporting role.

The introduction of Tesla adds yet another twist, as the film shifts
from real-but-possible stage illusion to steam-punkish sci-fi. This
transition is a hard note to pull off, since the beginning of the film
doesn't quite suggest such a direction, but if you're willing to let
Nolan lead you on the journey into increasingly fantastic realms, the
narrative rewards you with thought-provoking moral and dramatic
exploration of the issues raised.

A truly entertaining movie, and an original, unusual, dark ride — well
worth seeing in a theater for its grand scope and vision.