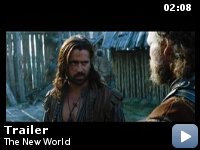 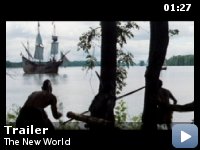 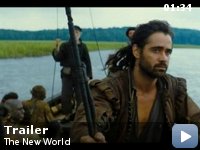 A drama about explorer John Smith and the clash between Native Americans and English settlers in the 17th century.

Storyline
Captain Smith is spared his mutinous hanging sentence after captain Newport's ship arrives in 1607 to found Jamestown, an English colony in Virginia. The initially friendly natives, who have no personal property concept, turn hostile after a 'theft' is 'punished' violently on the spot. During an armed exploration, Smith is captured, but spared when the chief's favorite daughter Pocahontas pleads for the stranger who soon becomes her lover and learns to love their naive 'savage' way of harmonious life. Ultimately he returns to the grim fort, which would starve hadn't she arranged for Indian generosity. Alas, each side soon brands their own lover a traitor, so she is banished and he flogged as introduction to slavish toiling. Changes turn again, leading Smiyth to accept a northern-more mission and anglicized Pocahontas, believing him dead, becoming the mother of aristocratic new lover John Rolfe's son…

Taglines:
Once discovered, it was changed forever

Terrence Malick finished the script in the late 1970s, but it lay dormant until 2004.

Factual errors:
Captain Christopher Newport had part of his arm, including his hand severed before he landed at Jamestown.

Colonist:
You said to hang him, sir.

Captain Christopher Newport:
Now remember Smith, you've come to theses shores in chains. You're under a cloud, which you'll darkened considerably if I hear any more of your mutinous remarks. Is that understood?

Audiences will be very divided.


Let me start off by saying that I was introduced to the films of
Terrence Malick in 1998 when I watched and was blown away by 'The Thin
Red Line.' It is one of the best war movies ever made and while I can
rant about it at length, that review belongs on a different page. It
was with great anticipation that I waited for 'The New World.' I was
lucky enough to get tickets to an advance screening and the theatre was
full of people like me. Their take on the film was almost as
interesting as the film was.


'The New World' is a film that will draw out one of two very powerful
emotions: Love or Hate. I really don't believe there is a middle ground
in this case. I think it is quite possibly the most beautifully
photographed film I have ever seen. It is astonishing. The score from
James Horner is, in my opinion, his greatest work. He's a wonderful
composer but he has exceeded himself on every level. This is a movie
that can be watched like art (because it is) and listened to as a
symphony (it might as well be one). Very few movies leave me stunned
and 'The New World' is so luscious that I think it is worth the
journey, even if it is only to look at how beautiful it is and listen
to how glorious it is. Is that a superficial way of looking at things?
Perhaps, but they are the film's two most brilliant qualities.

'The New World' does have problems and I think it falls very much into
a 'buyer beware' category. Malick's movie is long — very long — and
feels every moment of it. I don't mind these things because I found it
enchanting; many in the audience with me did not. These are not people
who are 'dumb,' or who 'don't get it.' They are people who are used to
99% of the films that you will see. 'The New World' is very
self-indulgent at times. No one can reasonably defend the pace of the
film. I want to and I can't. This is a movie so full of substance that
it is detrimental. It is so rich and textured that it would be hard to
say where things could have been improved, but aside from the first
forty minutes which deal largely with the question of whether or not
the Europeans can survive the first winter or not, the dramatic
'action,' that is, the engine of a script that pushes one scene into
the next, is idling at best. 'The New World' has a plodding pace and it
took me on a nice quiet stroll that I enjoyed immensely. I can not, in
good conscience though recommend to the man on the street that he go to
see it. If less than a third of the theatre I was in walked out, I'd be
stunned. I lost count because so many people left. Mostly the middle
hour and a half of the film is to blame. Scenes drift from one to the
next — they're stunning and textured and personally I enjoyed them —
but they involved a lot of hanging out. Two people hanging out in the
woods. I understand that the film has deep meditative and philosophical
meanderings about man's relationship with nature and how one impacts
the other. I get it. But a lot of the love story is about two people
hanging out in the woods. All the time. If one of them had said 'Let us
go watch the grass grow for the afternoon,' it would have been the most
honest line in the entire film. It is the only thing I will fault
Malick for here because it really does kill the film for a lot of
people. His intelligence should not be questioned. I wish only he'd
tried to focus the script a bit more and been specific rather than
general. Can two people from different cultures be together? We get it
already. We got it an hour ago. Oh, more grass growing … must watch
… ha! Forgive my little joke.

The argument to be made though is that this film has not been made for
everyone (the studio is no doubt surprised to learn this and will be
scrambling to recover their money — they did a good thing in making it
but they're going to lose their shirts). It was made by Terrence Malick
for Terrence Malick. I'm glad to have seen it but I spoke with twenty
people who were not. There will be constant arguments on the user
boards here at the IMDb. The film is going to have rabidly fanatical
supporters who think everyone else is just too stupid to get it. And it
is going to be criticized by many, many others who died a thousand
deaths just trying to sift through the movie.

Two final thoughts: the first is that I hate myself for having to say
anything negative about Malick or his film. He's a special film-maker
and his films make it worth going to the theatre. 'The New World' is
great but flawed and it is dishonest for anyone to pretend otherwise —
such behaviour is deceitful and pretentious.Thought number two is that
although the film is equal parts challenging and rewarding (as great
movies should be) it is especially important in the case of 'The New
World' to see it in the theatre. It is so majestic in scope that I
don't believe the greatest home theatre can do it justice. It is truly
epic in its cinematography and score. If it doesn't win Oscars for both
we will have witnessed a massive artistic injustice. NOTHING this year,
NOTHING has come close to being a threat to 'The New World' for either
of those two categories. Appreciate them as they were intended to be
seen.