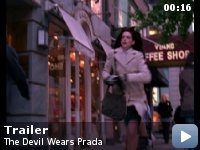 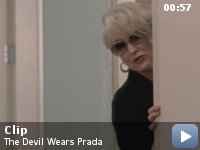 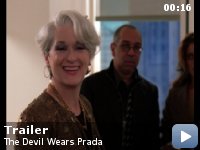 A naive young woman comes to New York and scores a job as the assistant to one of the city's biggest magazine editors, the ruthless and cynical Miranda Priestly.

Storyline
In New York, the simple and naive just-graduated in journalism Andrea Sachs is hired to work as the second assistant of the powerful and sophisticated Miranda Priestly, the ruthless and merciless executive of the Runway fashion magazine. Andrea dreams to become a journalist and faces the opportunity as a temporary professional challenge. The first assistant Emily advises Andrea about the behavior and preferences of their cruel boss, and the stylist Nigel helps Andrea to dress more adequately for the environment. Andrea changes her attitude and behavior, affecting her private life and the relationship with her boyfriend Nate, her family and friends. In the end, Andrea learns that life is made of choices.

Taglines:
High fashion, low cunning – and the boss from hell.

For the photo of Andrea with her parents, Anne Hathaway posed with her own mother and David Marshall Grant.

Continuity:
When Miranda and Andy are being driven in Paris after the luncheon, they appear to be circling Place de la Concorde based on the view out the window. You can see Pont Alexandre III several times and other landmarks around the Place.

The Girl And The Sacred Cow

I'm not a girl, so I knew next to nothing about Anne Hathaway, I went
to see Meryl Streep and oh boy, did I see her. An inedited Meryl
Streep, far, far away from anything she has ever done and that is
saying something, isn't it? Blazing with self confidence, Miranda
Pristley is a monumental modern queen. Hints of human trouble at her
own personal castle doesn't disturb that imperious facade and her
extraordinary talent to say "No" I may be totally out of touch but I
just wanted Anne Hathaway out of the way. It bother me so much. I
longed for the young Julie Christie in that role. The Christie of
"Darling" can you imagine? Then yes you have a battle of the titans not
a predictable, tired, phony fairy tale. When Hathaway's boyfriend tells
her "You have become one of them" I wanted to shoot myself because
that's obviously what was suppose to happen but other than different
outfits and make up I saw no difference in the girl. I enjoyed very
much Stanley Tucci and Emily Blunt's performance and I'm recommending
the film just to witness Meryl Streep, the greatest actress of our or
any generation, dazzles us with an extraordinary new face.