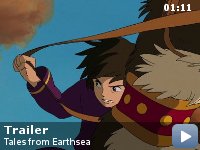 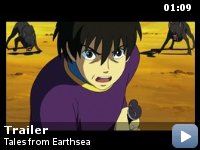 Something bizarre has come over the land. The kingdom is deteriorating. People are beginning to act strange…

Storyline
Something bizarre has come over the land. The kingdom is deteriorating. People are beginning to act strange… What's even more strange is that people are beginning to see dragons, which shouldn't enter the world of humans. Due to all these bizarre events, Ged, a wandering wizard, is investigating the cause. During his journey, he meets Prince Arren, a young distraught teenage boy. While Arren may look like a shy young teen, he has a severe dark side, which grants him strength, hatred, ruthlessness and has no mercy, especially when it comes to protecting Teru. For the witch Kumo this is a perfect opportunity. She can use the boy's "fears" against the very one who would help him, Ged.

Taglines:
Once humans and dragons were one. Then, humans chose land and sea, and dragon chose wind and fire. [Japanese release]

Hayao Miyazaki wanted to direct the film but was busy filming
Howl's Moving Castle at the time. Producer Toshio Suzuki choose Goro Miyazaki to direct since he was impressed by Goro's talent of making decisions quickly and properly while working in the Ghibli Museum, and his ability to draw pictures. Hayao was against Goro directing and production was very tense.

Prince Arren:
You must face it, Cob. Everyone fears their own mortality.


After watching this film I was pleased with the overall feel and look
the production. Most notably I was impressed with the studio's visual
creation of Earthsea. While the artistry and animation quality does not
entirely measure up to other recent Ghibli studio films, I felt it did
create a rich and colorful setting in which the story unfolds. A solid
score also helps to shape the vibrant world that the movie conveys.
However, I wouldn't consider all this to be a faithful representation
of Ursula k. Le Guin's literary Earthsea, but rather something unique
on to itself. One thing in particular that I think separates the film
setting from that of the books' is the absence of the sea. I'm not
saying its not there, just that it seems to mostly be in the
background.

As for the story I don't think it stands out as anything great. It was
limited from the start. The movie like the book is a single episode in
a much larger tale. In no way could it possibly encompass the magnitude
of the Earthsea series, let alone the main events in The Farthest
Shore. It would simply be too much to present in a canvass of its
length. As a result It lacks the epic feel of Princess Mononoke or the
closure that comes at the end of Spirited Away. In other respects
though, the film borrows heavily from Ghibli's previous works, mainly
with the characters. They are shadows of former Ghibli creations, but
due to their interaction and set of circumstances they retain some
originality. I might also add that they come off as serious, and are
far removed from the playful personalities that give other Ghibli films
their charm. This said they still manage to play out their given roles
and drive the story forward. From beginning to end the film holds up in
large part because the setting never loses its feel.

I enjoyed this picture in spite of its flaws, again because of it's
look and feel. For once I could see winged dragons clash and wizards
face off in a Ghibli film. In my opinion Goro Miyazaki did a decent job
bringing it all to life. At the same time, I hope he will learn from
this experience and strive to do better next time. After my seeing Gedo
Senki he has my support.