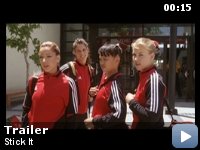 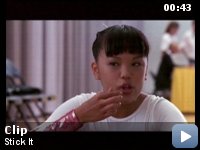 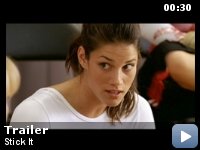 After a run-in with the law, Haley Graham (Missy Peregrym) is forced to return to the world from which she fled some years ago. Enrolled in an elite gymnastics program run by the legendary Burt Vickerman (Jeff Bridges), Haley's rebellious attitude gives way to something that just might be called team spirit.

Storyline
Haley Graham is a former gymnast-turned-juvenile delinquent who, after one too many run-ins with the law, is forced to enroll at an elite gymnastics academy, the VGA in Houston, Texas which is run by the legendary Olympic gymnast Burt Vickerman. But the rebellious Haley is not welcomed into the academy by the other teenage gymnasts who despise her for walking out on her Junior Olympic team years earlier during a competition which cost them the gold medal. But Haley is not a docile person either and makes every effort to provoke conflicts with the other girls. Vickerman takes it upon himself to coach Haley in his own way to make her regain her self respect for the VGA's coming spot on the Gymnastic Nationals.

Taglines:
It's not called gym-nice-tics.

Originally there were to be two sisters on the team played by Courtney and Kim Hirose, but Kim decided her senior year of high school would be more important so the sister characters were removed.

Continuity:
Haley puts on pants when she leaves the gym during the break in the IG Classic. When she is shown re-entering the gym and walking to the beam, her pants have disappeared. After the beam routine, she picks up her pants from a chair off to the side. How did they get there?

Joanne:
Vic, can we retire the old long-sleeved leotards? I have a constitutional right to bare arms.
[flexes]

Joanne:
Well, doesn't she have to homeschool?

Haley Graham:
Mina? Tell the foxymoron I got my GED when I was 15.

Mina Hoyt:
Joanne, Haley got her GED when she was 15.

Joanne:
What's with all the closed captioning? I'm not mute! And GED? What does drunk driving have to do with school?

Stick It to the Teen Movie


So maybe it isn't an Oscar winner, but Stick It was, by far, certainly
not the worst movie to hit theaters this year. No, Tristan & Isolde
would take that honor. Still, I thought this movie was worth a review
written by someone who was not so obviously a guy dragged to the
theater by his girlfriend and by someone with some prior experience in
the gymnastics world.


While this is not a movie that adults will credit as worth while, the
younger generations (13-20) will certainly find it entertaining. The
comedy, in my opinion, was well scripted and executed. The actors will
not win any awards for their performances, but they were able to bring
the characters to life and make them seem real.

The struggle shown for the girls in the gymnastics competitions is one
that most competitors face. The judges are harsh and the rules, some of
them, are ridiculous.

The movie is ultimately about overcoming the obstacles thrown in your
life, finding someone who will believe in you no matter what, and
realizing what is most important to you.

I would certainly recommend this movie.