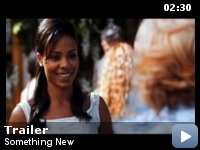 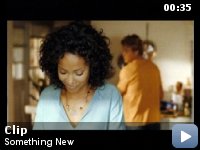 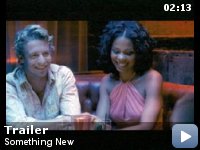 Kenya McQueen, an accountant finds love in the most unexpected place when she agrees to go on a blind date with Brian Kelly, a sexy and free-spirited landscaper.

Storyline
Kenya McQueen is a successful African-American CPA, working her way to the top of the corporate ladder — but her life has become all work and no play. Urged on by her friends to try something new and to let go of her dream of the "ideal black man," she accepts a blind date with an architectural landscaper named Brian, only to cut the date short upon first sight, because Brian is white. The two meet again at a party, and Kenya hires Brian to landscape her new home. Over time, they hit it off, but Kenya's reservations about the acceptance their romance will find among her friends and family threatens everything. An intelligent romantic comedy that chooses to deal with issues of race and perception in a straight-forward way, from a point of view not often seen: that of a successful, upper-class black woman.

Taglines:
She had it all under control. Except her heart

Sanaa Lathan's character, Kenya, is the daughter of Alfre Woodard's character. They share the same relationship in
Love & Basketball and also in
The Family That Preys.

Continuity:
When Brian paints Kenya's toenail red, at several points her toenail is missing the polish.

Joyce McQueen:
This looks like a bordello in Bangkok.

This movie was on point


Geesehoward, to clarify something in your post: Sanaa's lover did not
"assume" that she had a weave. It was after a night of lovemaking that
he asked her about it as they lay in bed the next morning. I'm sure he
was trying to run his fingers through her hair and found he was unable
to.


I am a black woman who is married to a white man. I read the interview
with Sanaa where she talked about living in Harlem and being terrified
of holding his hand because she was afraid of the judgment. I felt as
though she was writing my life story. Before we got married, my then
boyfriend lived in Soho and I in Harlem. Walking around together in
lower Manhattan, we got a few looks, but nothing even remotely close to
the venom that was spit at us when we were together up in my
neighborhood. People would stop dead in their tracks, hands on hips and
say horrible things to us! And this is in the 21st Century! There were
times I would actively dissuade my husband from showing me any
affection in a Black environment because I didn't want the brothers to
take it the wrong way and think it was an overt slap in their face–
you know, white man comes up in to the Black neighborhood to claim the
Black woman while the Black man stands idly by. But after a time, I got
over it. My man was just trying to love me. He was willing to take all
the insults and stand by me and allow me to open myself up and let him
in, so to speak. And I am so glad I did. I have been fortunate in
having had positive relationships with all of the men I have dated
seriously (who btw, were all Black). They all brought something special
to the table. My husband just happened to come into my life at the
right time when I was opening up to the idea of trying "something new".
I have learned a lot from him, but he has also learned a lot from me. I
think this movie did SO much in the way of allowing people to get a
little more used to the idea that love comes in all shapes sizes and
colors, and that it also comes with problems, depending on the type of
relationship. Interracial relationships are going to always have family
and societal disapproval, but guess what, everyone comes around
eventually once they realized that it's not superficial, that there's
true, honest love there. This is because people are just people, and if
someone takes the time to get to know you, you discover all the things
you have in common that have nothing to do with skin color. The moral
of this extended post is this: After we had been dating for some time,
my husband moved up to Harlem. Before you knew it, he was friends with
everybody on the block and knew more people in my neighborhood than I
did. That's because people are just afraid of what they don't know. Yes
there is a lot of historical baggage attached to race in this country,
but we can't keep schleping it around with us all the time, we've got
to let it go, let it flow. I encourage all of you to see the movie. It
was your typical predictable rom com, yes, where everything works out
okay in the end, but it also has a lot to recommend it. I thought it
was on point and funny and sad and all that good stuff. Go see it!
(Plus it's the first studio film that's written, directed, produced and
starred in by Black women!) You go ladies!