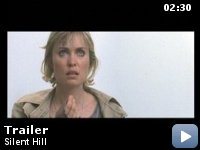 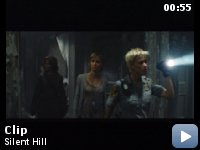 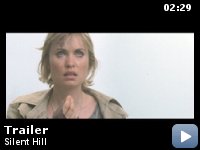 A woman goes in search for her daughter, within the confines of a strange, desolate town called Silent Hill. Based on the video game.

Storyline
After the continuous sleep walking episodes of Sharon, the young daughter of Rose Da Silva, the decision is made to take Sharon to the place only mentioned in her restless dreams- Silent Hill. However, the road to Silent Hill is anything but easy to access, and Rose creates a high speed chase between herself and a police officer only to end in a crash for them both. When she wakes up, Sharon has disappeared and Rose is at the entrance to the deserted, dream-like town of Silent Hill. As Rose begins the search for her daughter, she does not realize the terror and mystery surrounding her. Rose is led on a blind search for her beloved daughter, finding herself getting more and more entwined into disturbing past of Silent Hill.

In the film, Silent Hill is a desolate ghost town that had been abandoned because of a dangerous 30-year-old coal fire burning in the mines under the town. Screenwriter Roger Avary used a real-life town as the inspiration for Silent Hill: Centralia, Pennsylvania. Centralia is almost completely deserted due to a mine fire burning right under the community for 40 years. Avary saw what Centralia had become, as well as its history, and decided to use its past as the basis for Silent Hill.

Revealing mistakes:
When Rose first enters Silent Hill, right before the camera starts circling around her, you can see that her locket isn't a locket at all but an oval key chain.


I'm not sure what the original comment leaver saw last night, but it
certainly wasn't Silent Hill.

I saw a critic screening last night, and must say I was highly
impressed. As a fan of the games, and anything related to them, my
faith has been firmly established in Gans and Avery, and I can only
wish for sequels.

The atmosphere was perfect, the acting was on point, the creatures were
amazing, well, everything was amazing.

The town itself looks just like the town we love, and it's almost like
coming home again. You'll see what I mean when you finally get to see
the film.

Just be prepared for a disturbing, bloody (oh man, the blood), and
genuinely creepy ride.

I'd say more, but giving spoilers would be like slapping you in the
face.