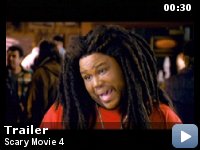 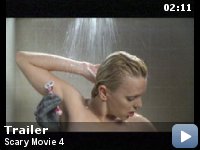 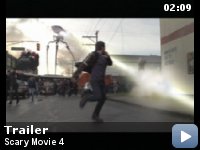 Cindy finds out the house she lives in is haunted by a little boy and goes on a quest to find out who killed him and why. Also, Alien "Tr-iPods" are invading the world and she has to uncover the secret in order to stop them.

Storyline
The unemployed Cindy Campbell is hired to work in a cursed house as caretaker of an old lady and meets the ghost of a boy. Meanwhile, the teenager son Robbie and the young daughter Rachel of his next door neighbor and crane operator Tom Ryan are spending the weekend with their loser father. Cindy and Tom meet and fall in love for each other, but when Giant Tripods invade Earth, Tom escapes with Robbie and Rachel; Cindy travels to a village, trying to find the answer to a riddle to save the world; and the president of USA organizes the defense of the planet in UN under his intelligence and leadership.

Taglines:
The funniest thing you ever sawed.

The
Saw &
Saw II sets are so exact that they look as if they're the same ones used in the original films. The Saw producers asked if they could use the bathroom set from this film for
Saw III.

Continuity:
The
Saw villain's tricycle features a straight handlebar when he enters the restroom. Next, in the shot with Zoltar, the handlebar is curved.

Dr. Phillip C. McGraw:
You're not dead. You've been taken against your will.

No brains were harmed during the making of this production.


Scary Movie 4. Is it an example of good film-making? No. Will future
film students study this movie and its revolutionary techniques? No.
Could I have written this script in half an hour while stoned? Yes. Can
I remember the last time I laughed this hard? No.

The key to enjoying a Scary Movie is to see it as a series of sketches
based on popular movies, rather than a stand-alone film. The spoofs are
extremely obvious and require as little thought to understand as it
must have taken to write them. But as far as juvenile humour and crude
visual jokes go, David Zucker does it right. You might question
Zucker's actual skills as a director, but I dare you to call any of his
movies unfunny.

Another reviewer mentioned that he missed the Wayans' style of comedy
and brought up the scene where a blind Carmen Electra mistakes a church
seat for a toilet as one of the funny scenes. Funny how I thought that
was the only scene in the entire movie where the comedy fell on its
face. The Wayans' relied far too much on lame sexual humour and
gross-out jokes and I enjoy slapstick far more than that.

Not that Scary Movie 4 doesn't have its fair share of (hilarious) crude
jokes. I won't spoil all the fun for you, so I'll just mention my
favourite: Charlie Sheen, haunted by his past, tries to commit suicide,
unfortunately the sleeping pills he swallowed turn out to be Viagra.
That's the level of the humour in this movie, and if you are
entertained by violent slapstick, people getting hit by cars, sexual
jokes, and brilliant dialogue such as:

…then this movie is worth buying a ticket for. But if you can't stand
lowbrow, dirty, and obvious comedy, you better stay away. Personally I
thought 4 was the funniest in the entire series, after #3. If a movie
can make me laugh for an hour and 22 minutes, I can't hate it. While
Scary Movie 4 definitely isn't a "good" movie, it's hard to put down
comedy this funny. Craig Bierko does a very good Tom Cruise impression,
as well. If you liked the other movies, especially 3, this is a must
see.

Dirty, juvenile comedy is rarely this funny. Strongly recommended if
you're in the mood.(r#16)