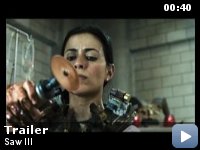 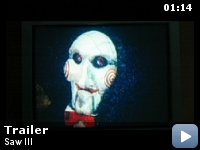 Jigsaw kidnaps a doctor to keep him alive while he watches his new apprentice put an unlucky citizen through a brutal test.

Storyline
Jeff is an anguished man, who grieves and misses his young son that was killed by a driver in a car accident. He has become obsessed for revenge against the man and reckless with his wife and daughter. When Dr. Lynn Denlon, who has troubles with her marriage, is abducted by the deranged Jigsaw's apprentice Amanda, she is brought to a gruesome warehouse to keep John Kramer alive in spite of having a terminal brain tumor. Amanda puts a necklace gadget full of explosives around Dr. Lynn's neck connected to John Kramer's life support system, and tells her that if he dies the device will explode. Meanwhile, Jeff is submitted to a sick game of forgiveness with surprising dark consequences.

Taglines:
Pain: it's part of the puzzle. Blood: it's the price of freedom. Death: it's not that easy.

1000 special posters were made and were sold for $20 each in support of Saw III and the American Red Cross. Tobin Bell, donated 2 Vials of his own blood to be dumped into the red ink vat. All 1000 posters were then printed with the red ink vat and later sold. However, the first print was put up for auction. It was also signed by the entire cast and crew. All proceeds from both sales, went to the American Red Cross.

Continuity:
When Lynn, the Doctor, is drilling the four holes in Jigsaw's head for the operation, tape is on the drill to mark the maximum depth. The placement of the tape changes positions throughout the scene, between 1/2 inch and 1 1/2 inches.

Dr. Lynn Denlon:
You're asking me to do the impossible.

Amanda:
I'm not asking you.
[referring to Jigsaw]

Hardcore "Saw" Fans Will Be Pleased


I managed to get a free screening to see the third installment of the
"Saw" series and I walked into the theater with low expectations,
mainly because I was positive they couldn't possibly make yet another
great Saw film. I was wrong.

Saw III is just as good as the original Saw, and is much more like it.
I suggest you watch the previous two films before going to see Saw III,
like I did, otherwise it might be quite confusing at times

The gore in Saw III is so strong it will make even the strongest
moviegoers cringe, although I thought that not all of it was necessary,
and some of it was there just to make the audience shield their eyes.
The film had some huge twists, and when I looked on the Saw III message
boards I found it amusing how many fake "Spoilers" there were. Don't
listen to them, just wait and see the movie. Some of the Traps in the
film I thought were very far fetched, and couldn't possibly have been
made by two people. Yes, I know its a movie but in the previous films
they seemed to be far more realistic, and the traps takes away some of
the suspense from the film. Another is I was disappointed with some of
the acting, not from any of the main characters (who all delivered
fantastic performances) but from those who were only in the movie for a
small portion of time, it takes away the realism of the film.

Overall Saw III is a good movie which does not disappoint, and I'm sure
fans of the previous two films will be pleased. I hope there isn't a
Saw IV, because this film is a good way to end the trilogy.

TagsCanada
Lonely Hearts
Tell No One