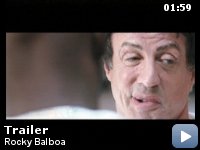 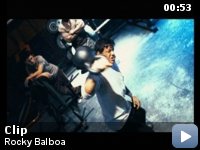 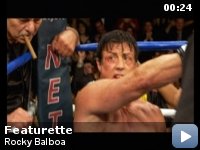 Rocky Balboa comes out of retirement to step into the ring for the last time and face the heavyweight champ Mason 'The Line' Dixon.

Storyline
When he loses a highly publicized virtual boxing match to ex-champ Rocky Balboa, reigning heavyweight titleholder Mason Dixon retaliates by challenging the Itallian Stallion to a nationally televised, 10-round exhibition bout. To the surprise of his son and friends, Rocky agrees to come out of retirement and face an opponent who's faster, stronger and thirty years his junior. With the odds stacked firmly against him, Rocky takes on Dixon in what will become the greatest fight in boxing history, a hard-hitting, action-packed battle of the ages.

Taglines:
Never give up. And never stop believing.

Antonio Tarver (the real light heavyweight champion at the time of production) trained for 5 weeks prior to the film and had to put on 25 pounds.

Incorrectly regarded as goofs:
During the scene when Steps is looking over Rocky's collection of championships and photos, it has title belts on the wall that Rocky never actually won in his career. However, 16 years have passed between
Rocky V and this film (in which we don't see the events), and it is entirely possible that, in the time between films, Rocky managed additional fighters and THEY won the awards in question.

HBO Commentator:
Yet another quick knockout for Mason Dixon, almost perfunctory; the fans let him know how they feel about it.

Best one since the original


Had the opportunity last night to see the World Premier of Rocky Balboa
two months before it will be released. A great movie. I was impressed
with it, in fact the storyline is something we will all appreciate. I
am looking all over the internet right now to see if I can find the two
speeches Rocky gives in the movie, that gave me chills. One was to the
commission, when he tries to get his boxing license, and the other to
his son. The acting is great, the storyline as stated before is great,
the cast is well put together as well. This is Stallone's best acting
ever. The only downfall, I thought was the soundtrack, as Mason Dixon
(Antonio Tarver) entrance music to the fight is great, and of course
the theme to Rocky is great, but other than that the soundtrack was not
good at all. However as we all know we cannot judge a movie by its
soundtrack. This is a must see!

TagsUSA
The Pursuit of Happyness
The Good Shepherd