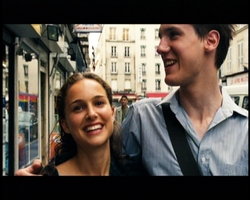 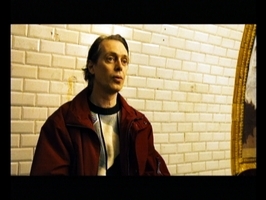 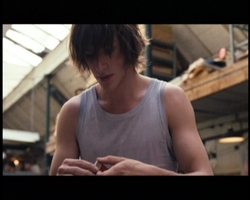 Through the neighborhoods of Paris, love is veiled, revealed, imitated, sucked dry, reinvented and awakened.

Storyline
Paris, je t'aime is about the plurality of cinema in one mythic location: Paris, the City of Love. Twenty filmmakers have five minutes each; the audience must weaving a single narrative out of twenty moments. The 20 moments are fused by transitional interstitial sequences and also via the introduction and epilogue. Each transition begins with the last shot of the previous film and ends with the first shot of the following film, extending the enchantment and the emotion of the previous segment, preparing the audience for a surprise, and providing a cohesive atmosphere. There's a reappearing mysterious character who is a witness to the Parisian life. A common theme of Paris and love fuses all.

Taglines:
Stories of Love. From the City of Love.

The original intention of the film was to represent each of the 20 arrondissements of Paris but this idea was abandoned together with filmed segments by directors Christoffer Boe and Raphaël Nadjari.

Incorrectly regarded as goofs:
In the last segment, where the grave of Jean Paul Sartre and Simone de Beauvoir is shown, the audio and subtitles both say Simon Bolivar. This is not a goof; rather, it is showing that Carol (Margo Martindale's character) is not completely confident in French and/or history.

Carol:
Of course, at my age, I didn't expect any of that.

The bizarre and beautiful language of love…


Although I live in Minnesota, I have been studying in France lately and
came across this bizarre gem of a film.

This movie was amazing, to say the least. A creative and unique film,
the different directors each lent something different to their
interpretation of love in the City of Light. The first instinct is to
attempt to fit each one of these little stories into an overall
storyline, much as can be done with 2003's Love Actually. This attempt,
however, renders the magic of each individual segment obsolete. When
taken at face value, with each of the short segments taken as its own
individual film, the love stories together tell a beautiful message.

The film is strikingly bizarre at times — often to the point of
confusion — and each individual segment can be hard to follow. Still,
to a watcher who pays close attention to each of the segments, the
short plot lines become clear after a short time. The confusion is
almost intriguing; it keeps you on the edge of your seat waiting for
what will come next. It leaves the viewer wondering "Did that really
just happen?" yet also leaves them satisfied that it did, indeed,
occur. It's the kind of movie where the viewer, upon leaving the
theater, can't actually decide whether they loved it or they hated it.
The initial reaction is to go and watch it again and again, just to see
these individual lives blend together into a cinematic masterpiece.

The interesting decision to make the movie multilingual adds something
to the spectrum of people who can relate. It adds to the reality of the
film — here, the American tourists speak English, the Parisians
French, and so on. The number of people that the film encompasses leads
to an understanding of the international language of love.

From sickness to the supernatural, the love of parents to the love of
husbands, this film covers all the bases of romantic storytelling. In
its beautiful and quirky way, each unique event somehow falls into
place to tell a story: that of all types, sizes, nationalities, and
shapes of love.