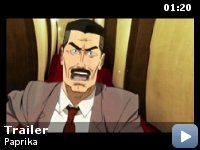 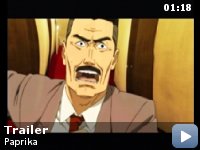 When a machine that allows therapists to enter their patient's dreams is stolen, all hell breaks loose. Only a young female therapist can stop it: Paprika.

Storyline
Three scientists at the Foundation for Psychiatric Research fail to secure a device they've invented, the D.C. Mini, which allows people to record and watch their dreams. A thief uses the device to enter people's minds, when awake, and distract them with their own dreams and those of others. Chaos ensues. The trio – Chiba, Tokita, and Shima – assisted by a police inspector and by a sprite named Paprika must try to identify the thief as they ward off the thief's attacks on their own psyches. Dreams, reality, and the movies merge, while characters question the limits of science and the wisdom of Big Brother.

Taglines:
This is your brain on anime.

The tall and short bartenders in Paprika's website are voiced by director Satoshi Kon, and the original author of the Paprika novel, Yasutaka Tsutsui, respectively.

Paprika:
Time for the greatest show on earth!


Paprika isn't for the faint-hearted. Don't expect a story for children.

The story opens with a cop who's plagued by a recurring nightmare, so
he seeks psychological help. If you've ever seen and enjoyed Alfred
Hitchcock's Spellbound, it'll help you understanding what's going on in
the film.

The cop forms a relationship with Paprika, a dream character who
becomes his guide in helping him understand what happened in his past
that makes him feel such shame in the present. Paprika assumes many
forms in the everchanging dreamscape to relate to the other characters.

This seems all good at the beginning, but the device that enables dream
analysis is stolen. This creates an even bigger problem than just
nightmares; what happens when people can't control their dreams and has
them hijacked by evil? Paprika isn't the easiest movie to sum up. On
one level, it's like watching dreamy, fantastical animation, but
there's also a deeper psychological question being asked: What is a
dream exactly and to what extent does it affect your consciousness and
waking life? How much fantasy is good for a person whether it be in
dreams or spending time on the Internet? If you bury guilt and desire
into your subconscious, how will it manifest in your dreams?

Paprika is definitely a visual spectacle. I don't recommend waiting to
see it on video. I had the honor of catching it on the big screen,
which I believe is necessary to capture the depth of the imagery. Parts
of it really seemed like dreams I've had (times when I've tried to
walk, but couldn't get anywhere and the harder I tried, the worse it
got).

I put Paprika up there with Pan's Labyrinth. A lot of people will be
turned off from it by the subtitles and another set of people will be
lost by the mythology in it. If you don't have problems with these
kinds of things, you will probably have a delightful viewing
experience.

It takes a person with an analytical mind to put the plot together. If
you follow the recurring images, the mythology will make sense. A lot
happens on the screen. I didn't have a problem understanding what was
going on and I enjoyed putting the puzzle together. I don't think most
moviegoers are like that these days, so I can see them getting bored or
annoyed because they can't figure out what's going on. If you prefer
the Disney genre of animation, avoid Paprika, it will just frustrate
you. If you're crave more than a simple plot, Paprika will satisfy that
hunger.

The soundtrack is quite good too. It's a refreshing break from Elton
John power ballads.