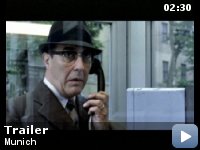 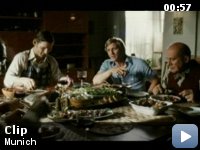 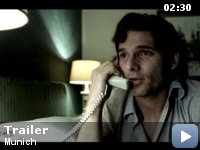 Based on the true story of the Black September aftermath, about the five men chosen to eliminate the ones responsible for that fateful day.

Storyline
After Black September's assassination of Israeli athletes at the Munich Olympics in 1972, Prime Minister Golda Meir okays a black-box operation to hunt down and kill all involved. A team of five gathers in Switzerland led by Avner, a low-level Mossad techie whose father was a war hero and whose wife is pregnant. It's an expendable team, but relying on paid informants, they track and kill several in Europe and Lebanon. They must constantly look over their shoulders for the CIA, KGB, PLO, and their own sources. As the body count mounts — with retribution following retribution — so do questions, doubts, and sleepless nights. Loyalties blur. What does it mean to be a Jew?

Taglines:
The world was watching in 1972 as 11 Israeli athletes were murdered at the Munich Olympics. This is the story of what happened next.

During the scene where Avner's team joins up with the Israeli commandos in Beirut, one of the commandos introduces himself as Ehud Barak. Barak was a member of the most elite commando force of the Israeli army, sayeret matkal, before becoming a politician and eventually Israel's Prime Minister.

Audio/visual unsynchronized:
When Avner is waiting for the Palestinian's daughter and wife to come out of their building, before letting off the telephone bomb, the little girl says the same line twice. Off-screen, she says hello to her driver before she actually meets him. She comes out, repeats the same line, and says hello to the driver when she meets him.

American Athlete:
Where are you guys from?

American Athlete:
What is your event?

Depth and detail – with no sides taken


This movie relates more than just a story of "Vengeance". Besides
proving that killing begets killing – it consists of numerous fine
details that reveal the hard work done at getting to the depth of
things:


For instance, only characters that get shot in the head slump to the
ground. The rest take time to die – they walk a few steps, spurt blood
and express a look of helplessness and inevitability before going out.
Yes its horrifying to look at, which is the point, but it is also real.

Every character is different, and though common in their desire for
vengeance, their temperaments are clearly distinguishable in the way
the hit men approach their task. Even the terrorists are not
stereotyped into hysterical, screaming lunatics. They range from the
visibly nervous to the cool Abu Salameh with the movie star style. They
are poets, intellectuals and guerrillas each with his story of the
conflict. They speak passionately about home – a recurring theme, along
with "family". Moreover, Spielberg does not attempt to mitigate the
grotesque manner of their deaths, for the blood of the targeted men
flows as freely as that of their victims – and when they are blown up,
their body parts dangle from ceiling fans. You are not here to feel
satisfaction over anyone's death, Spielberg says to the audience. Or as
Caine would say in Kung Fu: "The taking of a life does no one honour."

There are no easy "shoot-em-dead" eliminations. There are neighbors,
bystanders and obstacles that must be avoided and protected – with
variable success. Innocent people may be harmed – and one has to live
with that.

There are no mathematical certainties about the potential damage a bomb
will cause.

Perspectives and convictions can change, sometimes regrettably. "Don't
think about it – just do it" says Avner at one stage when a member of
the team expresses doubts about a target's guilt. But at the end he
wants evidence that the men he despatched were justifiably killed.
Implausible? No; it is only when he has been reunited with his family
and experiences the affection of wife and child that he allows himself
to reflect from a different perspective – their targets had families
too – what if he had killed the wrong men?

The paranoia that permeates the world of spies and assassins is built
up gradually – to the point where every survivor mistrusts everybody
else. One is doomed all one's life to walk with ears strained for
following footsteps. The length of the movie creates the right
atmosphere for this idea.

The end dissatisfies many because they would like a reassurance, a note
of optimistic finality – but Spielberg rightly offers none. It would be
dishonest of him to offer a false but comforting illusion.

It is interesting to contrast this movie with "Paradise Now" that has
no violence, a modest budget, and views the conflict from the
Palestinian camp. Both narrate completely different stories – yet, in
their respective ways, both humanize their subjects, defuse myths about
glory, and arrive at the same conclusion: "There's no peace at the end
of this."