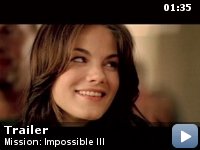 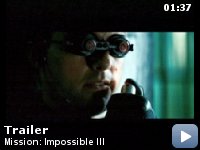 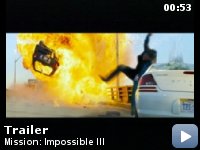 Ethan Hunt comes face to face with a dangerous and sadistic arms dealer while trying to keep his identity secret in order to protect his girlfriend.

Storyline
Super-spy Ethan Hunt has retired from active duty to train new IMF agents. But he is called back into action to confront the toughest villain he's ever faced – Owen Davian, an international weapons and information provider with no remorse and no conscience. Hunt assembles his team: his old friend Luther Strickell, transportation expert Declan, and background operative Zhen. They are to rescue one of his very own trainees, Lindsey who was kidnapped while on a surveillance detail of Davian. It soon becomes evident that Davian is well-protected, well-connected, and downright malicious. This forces Hunt to extend his journey back into the field in order to rescue his wife, Julia, and uncover IMF double agents in the process.

Keri Russell trained for three months in preparation for her big action scenes.

Errors in geography:
When Gormley is outside St. Peters he says his ETA is 2 minutes to the Sistine Chapel. Even running there would take far longer than this.

Owen Davian:
[to Ethan]
We put an explosive charge in your head. Does that sound familiar?

So what is the "rabbit's foot" anyway?


"Mission: Impossible III," the latest installment of the blockbuster
movies which in turn were based from a TV series, is for those looking
for a way to start off the summer season at the movies. Here is a movie
filled with action and nothing more. There are the usual: Tom Cruise
running and getting banged up, high degrees of improbability,
explosions, gadgets, the whole shebang. Still, "M:I:III" is a
fast-paced thriller that manages to get hold of you for the 120-minute
span of its running hour and never lets go.


After retiring as Impossible Missions Force (IMF) team leader to lead a
"normal" life with his fianceé Julia (Michelle Monaghan), Ethan Hunt
(Cruise) returns to the team to help recapture criminal arms dealer
Owen Davian (Philip Seymour Hoffman) who has escaped from prison and is
now making life difficult for the IMF. As for Hunt, his encounter with
Davian has upped the ante for him: he not only has to save the world
now, he also has to save the woman he loves. Cruise (either you love
him or you hate him) still fits into his role well, and Hoffman, who
has just won an Oscar for his portrayal of Truman Capote, also
effectively displays a chilling seriousness to his villain role. The
rest of the cast – Billy Crudup, Ving Rhames, Maggie Q, Michelle
Monaghan, etc. – all give nice performances.

It's a given that this film would offer little in terms of intellect or
depth in the script. Yet the way director J.J. Abrams and his
co-writers injected humor and emotions, plus how its action scenes were
superbly handled, save "M:I:III" from becoming just another passable
popcorn movie which is why I liked it. It is a film intended solely for
the purpose of escapism and it achieves that purpose. Although there is
a feeling that it could have been more, it easily surpasses the first
two "M:I" in an explosively stylish way.