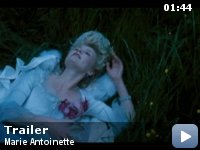 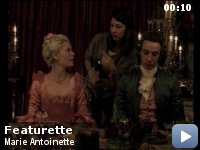 Storyline
"All eyes will be on you," says the Austrian duchess, Maria Theresa to her youngest daughter Marie Antoinette. The film, marketed for a teen audience, is an impressionistic retelling of Marie Antoinette's life as a young queen in the opulent and eccentric court at Versailles. The film focuses on Marie Antoinette, as she matures from a teenage bride to a young woman and eventual queen of France.

Cameo:
[Phoenix]
The men playing guitar(s) in the scene with a woman singing for Marie are members of the group Phoenix. The lead singer Thomas Mars is the life partner of Sofia Coppola.

Errors made by characters (possibly deliberate errors by the filmmakers):
At the first dressing, the Comtesse de Noailles introduces the Dauphine to Louise-Marie-Josephine di Savoia as the Comtesse de Provence before she had actually married the Comte de Provence.

Duchesse de Polignac:
There's something in the oysters!


and when she gets there, she gets bored, gossips, reads Rousseau, and
has beach-blanket pot parties in Amadeus outfits. I did like the music,
there is one inspired masked ball and a good "watch the sun rise" scene
– the strength of this film is its connection to high school culture,
seen through the eyes of a sweet, utterly conventional and finally
boring teenage girl, projected from the California suburbs onto 18th
century France. This is obviously also the film's weakness: this movie
is a beautiful, expensive still life that knows nothing at all about
French history, Europe, the Revolution, the Bourbons, how the ancien
regime worked, how incompetent wars and not Marie Antoinette's
Imelda-Marcos-like shoe fetish ran up the debt, about the conflict in
North America with England and Spain, about how leading members of
French government actually had brains – the films displays a nitwit,
decadent, wig-loving, golden-furniture France as though seen by a
France-hater in the Bush administration. As my brother pointed out, the
movie also blew the subject of a potentially great movie, which is
Marie Antoinette's inspired, sometimes brilliant defense of herself at
her later trial. Trying to learn about what happened to the French
court from this film is like trying to learn about American corporate
culture by watching J.R Ewing's 30 second business deals at the
Cattlemen's Club on Dallas. Well sure, politics wasn't the subject of
the movie, but why is the "chick stuff" buried in diamonds and
champagne? That makes these women seem way less tough and intelligent
than they actually were in the bloody contact sport of French court
politics. As an American watching this in Paris I was struck by the
film's lack of historical, political, and cultural sophistication, in
which Dunst is in every single frame and it's all one gigantic royal
slumber party until the peasants show up in an illiterate wordless mass
baying for bread and blood and shaking their satanic harvesting tools.
Ouch: The film makes the most sense as a weird allegory of Hollywood
inbreeding.