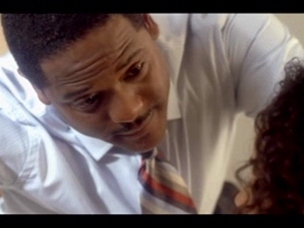 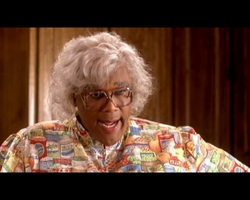 While planning her family reunion, a pistol-packing grandma (Perry) must contend with the other dramas on her plate, including the runaway who has been placed under her care, and her love-troubled nieces.

Storyline
While planning her family reunion, a pistol-packing grandma (Perry) must contend with the other dramas on her plate, including the runaway who has been placed under her care, and her love-troubled nieces.

Maya Angelou's character is named May, her childhood nickname.

May:
Love is many things. It's varied. One thing it is not and can never be is unsure.

And What a Family Reunion!


This is to me just an amazing, funny, delightful movie.

But first … to be honest, I wasn't planning on seeing this movie at
all. I had (woe be to me) never even heard of Tyler Perry. And the
film's title alone sounded … well … unappealing at best. The
synopsis I'd read suggested yet another movie with a man playing an
overweight black woman. That might have been funny once or twice … in
Big Momma's House, and The Nutty Professor … but surely can't keep
carrying so much water as to make yet another movie about this same
motif, right?


Well, be that as it may, I noticed that this film had hit the top of
the box office when it opened a week ago. And then I read a review this
morning by a typically politically correct reviewer who was "dissing"
the movie. Now this is a reviewer I've come to rely upon as always
panning movies I like and waxing enthusiastic about movies I dislike.
So reading this reviewer's badmouthing prompted me to try out this
movie … and I am so glad I did.

I think I can see why high-minded PC reviewers wouldn't like it. It's a
"popular" comedy, full of rough, earthy humor, celebrates Black
cultural child-rearing values, and unapologetically celebrates God and
family. No wonder it's been a hit with the general Black American
culture, especially Black Churchgoing culture.

What is it that makes this movie so funny and so deeply heart-warming
at the same time?

Well, in some ways, this is something of an old-fashioned morality
play. Such has a wonderful tradition in Western Culture … and in
African culture. A resurrection of the Morality Play is fine by me:
just a shocker, that's all. I kept thinking, "how are these characters
getting away with saying things like that?" As when the leading lady
says she's given her life to God and has been celibate and will stay
celibate till she's married. How is it possible for something like that
to show up in a general release movie in this day and age? Not as a
statement to be mocked, but as an expression of genuine faith in God
and Chastity? I just shook my head and smiled and enjoyed the sheer
frank morality of the movie every time it surfaced … which was pretty
often indeed.

The music was resplendent throughout the movie, but the sound seemed a
little problematic at times. The audio was almost echoing, flat, tinny
… sort of like a somewhat bad mono recorder.

The cinematography was fine, but in a way, very old-fashioned …
stylistically similar to the movies from the early days when films were
often framed as theater transferred to the screen. Maybe that reflects
Tyler Perry's background, I understand as a playwright. But for
example, the camera follows the action in a very straightforward, even
simple way: head on, straight up, no angle shots, no through shots, no
complex dissolves or modern "realistic" camera "jiggling". Maybe this
is intentional: the movie is telling a plain, straight story with
feeling and humor and no hint of subtlety. If this is what's going on,
it's fine by me: because this makes for a very candid, very honest, but
never discomforting style. Perry's narrating a Story, Telling us What's
Happening. Nuance is not what we're after here. Very basic human themes
are painted with strong strokes. So we have a basic cinematography to
fit this purpose. Fair enough.

There's an interesting interplay of serious and humorous material at
two levels. First, there's some very tight sequencing in which strongly
emotional material is followed by strong humor. Some will like this,
some not, but it's very much at the core of Madea's character, and the
overall character of the movie. Second, "serious" scenes are sometimes
interspersed with humorous scenes inserted clearly for no other reason
than plain comic relief. I think some might find that a little jarring.
Still, it works for me very well. And this kind of thing goes back to
Shakespeare at least, so I know it works for others as well.

The acting and characterizations were wonderful. Now again, don't look
for subtlety, that's not the nature of the movie. But if it's good,
solid performances matching characterizations to characters, this movie
has it all. Tyler Perry as Madea and Joe was simply perfect. But the
entire cast provided strong, reliable performances. Including a
delightful cameo by Maya Angelou.

A few "plot holes" have been alleged. I see what's meant, but frankly,
don't agree at all. This is a movie that for the most part is stylized,
full of art and artifice, not a "realist" movie in which careful
plotting is critical for believability. A movie like this is more like
a painting, or a song … a ballad. A popular folk ballad, full of
humor and fun and tears and hugs … and lightly textured but
unapologetic moralizing. This movie is a classic combo of Entertainment
and Edification. The final scenes at the farm, and at the wedding,
really sum up the movie in both respects, and keeping a scorecard on
consistency of details is very out of place, it's directly
contradictory to the genre.

Last but not least, I have to say that the figure of Madea … tying
everything together with humor and wisdom … is a sheer delight. I'm
told she'll be back on the silver screen. Good … I can't wait to make
her acquaintance once again some day.

And needless to say I'm going to try to find and watch Diary of a Mad
Black Woman as soon as I can find it … !

TagsGeorgia reunion USA
Imagine Me & You
The Squid and the Whale