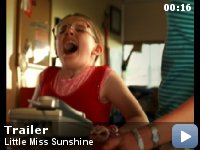 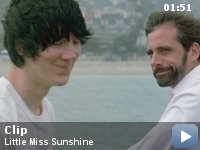 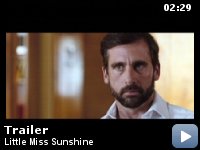 A family determined to get their young daughter into the finals of a beauty pageant take a cross-country trip in their VW bus.

Storyline
In Albuquerque, the housewife Sheryl Hoover brings her suicidal brother Frank to the breast of her dysfunctional and bankrupted family. Frank is homosexual and expert in Proust, and tried to commit suicide when he was rejected by his boyfriend and his great competitor became renowned and recognized as number one in the field of Proust. Sheryl's husband Richard is unsuccessfully trying to sell his self-help and self-improvement technique using nine steps to reach success, but he is actually a complete loser. Her son Dwayne has taken a vow of silence as a follower of Nietzsche and aims to be a jet pilot. Dwayne's grandfather Edwin was sent away from the institution for elders Sunset Manor and is addicted in heroin. When her seven years old daughter Olive has a chance to dispute the Little Miss Sunshine pageant in Redondo Beach, California, the whole family travels together in their old Volkswagen Type 2 (Kombi)…

Focus Features was involved very early on but dropped out in 2004.

Continuity:
How much popsicle Cheryl has eaten at dinner changes between scenes.

Richard:
There are two kinds of people in this world, winners and losers.

One Of The Best Movie "Gifts" I've Gotten This Year…


It is very rare to see a movie that can charm the hell out of an
audience without the use of special effects, worn-out clichés and
bombastic action set pieces these days. It's even more ridiculous to
hope that you will see such a film for FREE. But that's exactly what
happened to me tonight at a sneak preview of LITTLE MISS SUNSHINE.


I "discovered" this movie right here at IMDb, having heard not a peep
about it beforehand. By the time I finished watching the second trailer
for the THIRD time, I was floored…and hooked. Luckily, the Bulletin
Boards steered me toward the proper link to access sneak passes for
tonight's showing, and all I can say is that it will not pain me one
bit to pay for the privilege of seeing this gem a second time.

Assembling the best and most unlikeliest of ensemble casts you may
probably see all year, SUNSHINE on the face of it is a relatively (pun
intended) simple story. Little seven-year-old Olive (Abigail Breslin)
has one wish in life: to be considered for the finals of the Little
Miss Sunshine Pageant in Redondo Beach, CA. When her big chance comes
at the most unexpected time, it's up to her unbelievably fractured
family to pull themselves together and make it happen for her, no
matter what it takes.

And what it takes is a sad, painful, tragic and yet unendingly
hilarious trek in a barely operational VW bus from Albequerque, NM to
the Pageant. And although getting there is only half the fun and family
drama, you have got to see what happens to believe it when they finally
arrive and Olive gets to "do her thing." The strong cast sounds not a
single false note, and when the more touching moments arrive, they
don't seem forced the way they would in most other big-budget
behemoths, because these moments are truly earned. But WHAT a
collection of characters this is. Greg Kinnear is letter-perfect as
Olive's judgmental, failed motivational-speaker father; Steve Carell
finds new shades of darkest despair and human comedy as her suicidal
gay uncle, a leading Proust scholar; Paul Dano does amazing things with
little more than facial expressions as Olive's older brother who's deep
into Nietzche and a vow of absolute silence, and Alan Arkin, though he
has played this kind of role with both hands tied behind his back and
his eyes closed, still shines like a crazy diamond as her cantankerous
and hedonistic grandfather.

And barely holding this motley crew together is Toni Collette, who
amazes by playing a mother again and yet manages not to portray the
role exactly the same way, (you might recall her Oscar-nominated turn
as Haley Joel Osment's put-upon mom in THE SIXTH SENSE.) I'm not at all
familiar with the work of the two directors, Jonathan Dayton and
Valerie Faris, or the writer, Michael Arndt, but they have definitely
raised the indie film bar with this effort. Not a single moment is
wasted; not a single scene is in this film without having a reason for
being there, and it's all character-driven. There's also nothing fluffy
about it – commentary about everything from how twisted our pop culture
can be, to how our drive for being #1 winners can blind us to all of
the things that are the most important are all there under the
bittersweet laughs and tears for the audience to discover.

I can't recommend this one highly enough. And I can't wait to see it
again.