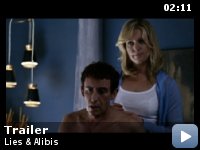 A man who runs an alibi service for adulterous husbands gets into a jam with a new client. In trying to remedy the situation, he must rely on an alluring woman who gets his heart racing.

Storyline
The crook Ray Elliot, whose former partner Jack is under a five million dollars contract, believes in statistics and runs a risk assessment and managing business, actually a front for a company that provides alibis to adulterous people that cheat their mates. He does not accept to give alibis for crimes and he has just hired the alluring Lola to be his assistant. When Wendell Hatch, the reckless son of his wealthy client Robert Hatch, accidentally kills his masochist date Heather in a kinky S&M game, Ray breaks his rules to protect his own name and hire some guys to clean the bedroom and vanish the body. Sooner Ray has many problems to resolve: the police is in his tail trying to find a clue about the disappearance of Heather; her jealous Mexican-American boyfriend wishes revenge against the murderer; Wendell is upset because Ray told his father about the crime; Robert is angry and hires the hit-man Mormon to kill Ray…

Taglines:
Planning a lunchtime rendezvous or an elicit affair and don't want anyone to find out? Do you need an alibi? Then Ray Elliot is here to help.

This is how I imagine Frank Tashlin does neo-noir


THE ALIBI is a smooth, elegant, neo-noir expertly shot by guys who did
pre-cog scenes in MINORITY REPORT. It is very reminiscent of Frank
Tashlin's work. Tashlin was the Warner Bros. cartoonist who ended up
doing vehicles for Jerry Lewis and Doris Day. While his cartoons were
strongly influenced by live action cinema, his live action features had
a distinctive cartoonish element.


Te same can be said for THE ALIBI which works as a very tightly knit
yarn and feels as precise as a special effects sequence. This precision
makes the film flow smoothly and the directors deliver Hollywood
entertainment at its best.

The cast is top-notch and the attached talent is the major asset of
this production.

The only major shortcoming of this feature is the complete absence of
emotions and character depth. The only character fully developed is the
main character and it is a shame because other characters are too flat
so the story fails to emotionally resonate. The screenplay feels like
the first draft and it seems that it was just a couple rewrites away
from being fully developed.

This is why THE ALIBI is just a well made programmer while it seems
that deep inside it possessed a much bigger potential.