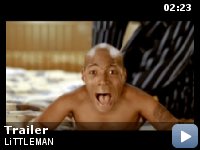 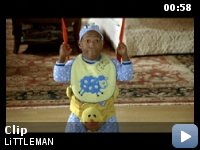 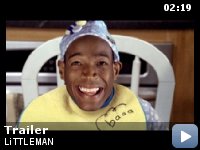 A wannabe dad mistakes a vertically challenged criminal on the lam as his newly adopted son.

Storyline
After leaving the prison, the dwarf criminal Calvin Sims joins to his moron brother Percy to steal an expensive huge diamond in a jewelry for the mobster Walken. They are chased by the police, and Calvin hides the stone in the purse of the executive Vanessa Edwards, whose husband Darryl Edwards wants to have a baby. Percy convinces Calvin to dress like a baby and be left in front of the Edwards's house to get inside the house and retrieve the diamond. Darryl and Vanessa keep Calvin for the weekend and decide to adopt him, while Walken threatens Darryl to get the stone back.

Taglines:
From the Guys Who Brought You "White Chicks".

Continuity:
In the end scene when Darryl and Calvin are walking back into the house Darryl tells Calvin to be quiet so his wife won't hear, but she isn't home yet from going to get her father out of the mental hospital.

Pops:
[after Calvin suddenly walks into the living room]
Hey man, you can't be just popping up like that without warning! For a moment I thought you were Chucky.Bout to… put you in a choke hold!


Comes this heartwarming tale of hope. Hope that you'll never have to
endure anything this awful again. *cough* Razzie award *cough*

I disliked this movie because it was unfunny, predictable and inane.
While watching I felt like I was in a psychology experiment to
determine how low movie standards could get before people complained.
When I requested my money back at the end of the movie I was informed
that because I watched the whole thing 'I wasn't entitled to
reimbursement'. I was told by the assistant manager that several people
had complained and gotten refunds already though.

The movie summary is pretty basic. The midget thief steals a diamond
and the poses as a baby to elude police. Underneath this clever outline
however, lies a repertoire of original, fresh and hilarious skits. Or
not.

If you answered 'yes' to any of the above then this movie is definitely
for you. Although it has been billed in some places as 'The Worst Movie
of the Decade', there is probably a movie or 2 that are
worse…somewhere. I can't say for sure. I gave this movie 2 stars
because we all know a review with only one star would indicate bias on
the part of the reviewer and then the review wouldn't be taken
seriously.

This lowbrow comedy is intended for a less intelligent audience and I
cannot in good conscience recommend it to anyone. Save your money for
something funny.

TagsCanada
Pirates of the Caribbean: Dead Man's Chest
The Girl Who Leapt Through Time