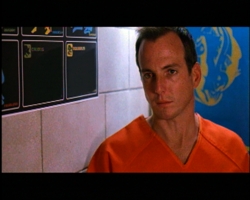 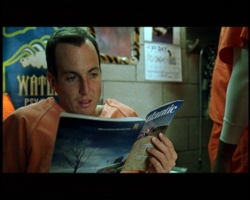 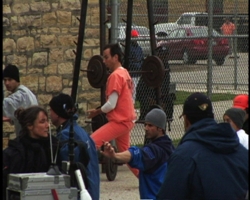 When a career criminal's plan for revenge is thwarted by unlikely circumstances, he puts his intended victim's son in his place by putting him in prison…and then joining him.

Storyline
John Lyshitski is a car stealing slacker, with a weed problem, and has been in Illinois' Rossmore State Penitentiary so many times, he knows its entire population of both staff and cons by their fast names. Cursed with the old ill luck of being in the wrong place, at the wrong time, in possession of the wrong car, he's been deemed a lost cause repeat offender in the eyes of everyone else. When the heartless judge, who has been behind most of his sentences, goes to the big court house in the sky, John decides to ruin the man's legacy by having the judge's only offspring, Nelson Biederman IV, thrown in the slammer along with him. Here, the world-class selfish jerk learns a certain old lesson the hard way: Do unto others as you would have others do unto you. But has John gone too far in the payback department?

Taglines:
Welcome to the slammer

Filmed at the now closed and historic Joliet Correctional Center in Joliet, Illinois – the same prison where the opening sequences of
The Blues Brothers were shot.

Continuity:
When Nelson Beterman IV is in the courthouse, you see John eating popcorn. In the first shot, you can't see the popcorn in the bag, but in the second shot, the bag is full to the brim. Again in the third shot, the popcorn is lower in the bag.

Barry:
Would you like some Merlot? I make it in the toilet!
[Nelson shaking with fear]


There are movies that follow a relatively obvious plot. There are
movies where you expect every plot twist ten minutes in advance. This
certainly is one of those movies. But then, why would you go see a
comedy looking for gripping plot lines? This is one of those movies
that would have bombed, in the wrong hands. Given an average director
and a mediocre cast, this movie would have been barely watchable. But
under the care of Bob Odenkirk and a trio of skilled actors, it turns
out as one of the funnier movies of the year.


Let me be clear about one thing: this movie is all about subtle, dry
humor. The situations are, on their own, intentionally not funny.
Played a different way, many of them would be downright terrifying. But
the way the actors carry themselves through it, their timing, their
facial expressions, bring out the absurdity of the serious script.

If you go into the movie expecting it to hit you in the face with
everything it's got, you may be disappointed. But if you go prepared to
pay attention and catch the nuances as well as the broad strokes,
you'll barely stop laughing.

TagsUSA
Infamous
Tenacious D in The Pick of Destiny