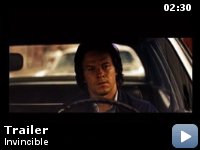 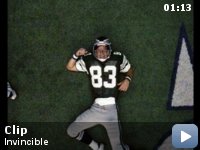 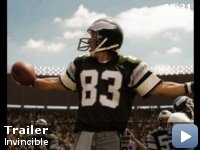 Based on the story of Vince Papale, a 30-year-old bartender from South Philadelphia who overcame long odds to play for the NFL's Philadelphia Eagles in 1976.

Storyline
In the sumer of 1976, 30-year old Vince Papale is having a tough run of luck. He's been working as a supply teacher for two days a week but has just found out that his job has been eliminated because of budget cuts. His wife gives up on him saying he'll never amount to anything and asks for a divorce. He works as a bartender and plays football with his friends. When the the new coach of the Philadelphia Eagles, Dick Vermeil, announces that he will hold open tryouts for the team, Vince reluctantly decides to give a try. In an almost unheard of feat, he manages to make the team and enjoyed a three year career as a professional football player. Based on a true story.

A common misconception is that the film is missing a primary character, specifically Philadelphia Eagles veteran QB #7 Ron Jaworski. But Jaworski was still on the Los Angeles Rams during this time frame. Jaworski was not traded to the Eagles until March of 1977.

Factual errors:
In the opening scene at Veterans Stadium, the game was depicted as a night game with the lights on and obvious darkness surrounding the parking lot. This game was actually a 1:00pm start time. Even at the end of the game, the time couldn't be any later than 4:00pm.

TV Anchor:
This is even stupider than I'm used to.

Support the underdog, after the movie you will smile!


After just seeing "Invincible" I must say thumbs up! Way to go that
finally after 30 years this true story is brought to the big screen.
Call me bias or partial because I'm an Eagles fan, but the story of any
underdog making an NFL team makes you happy. 30 year old bartender and
part-time school teacher Vince Papale who finds life a struggle from
his wife leaving him, to problems paying his bills he finds only one
hope that is to escape thru his love and passion for the Eagles. Papale
a season ticket holder and sandlot football star decides to give
himself a shot at a better life in 1976 when newly hired coach Dick
Vermil decides to hold open tryouts. Papale has the odds stacked
against him, but thru his will and determination to make it, because no
one ever expected him to do anything he prevails! Papale lands a roster
spot as a special teams player a blue-collar guy doing blue collar work
on the field. The scenes and background of this movie, especially the
way Veterans Stadium is shown is sketchy and unbelievable, but the
story is true and touching. Vince Papale played for the Eagles for
three seasons, well acted and done by Mark Wahlberg who showed
enthusiasm with this role. Also Greg Kinnear is great as legendary head
coach Dick Vermeil, overall a great movie of an underdog that leaves
you smiling at the end. I hope more real-life NFL movies are made about
players, because "Invincible" sets the standard.