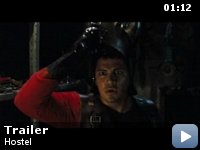 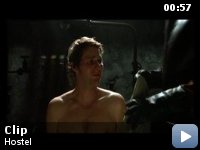 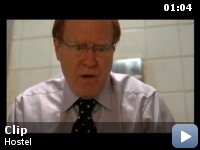 Three backpackers head to a Slovak city that promises to meet their hedonistic expectations, with no idea of the hell that awaits them.

Storyline
3 backpackers are in Amsterdam where they get locked out of their youth hostel. They are invited into a man's house where he tells them of a hostel somewhere in eastern Europe where the women are all incredibly hot and have a taste for American men. When they get there, everything is too good to be true – the hostel is "to die for"

Errors in geography:
Near the end, as the train enters the Vienna station a sign saying Praha (Prague) can be seen reflecting off the train windows.

Moral Choices and the Dark Side of Humanity


I just got back from an L.A. screening of Hostel. I haven't seen an
effective horror film like this in a long time. My stomach was still
knotted up after we left the screening. The last time I felt like that
was when I saw ALIENS for the first time about 19 years ago. Since
then, no other horror film has ever made me feel like that. I certainly
didn't expect it from this one. As much as I loved Cabin Fever, I'm not
blind to the shortcomings of its script. As such,I was expecting more
of the same from Hostel – dark humor, gore, and a sense of dread. I'm
happy to see that director Eli Roth has taken a big step forward in
becoming a better storyteller and filmmaker.


Admittedly my heart sank when the film began. The scenes introducing
the main characters were blandly shot and edited. All I could think
was, 'Oh no. Roth succumbed to some unseen studio pressure to make a
normal-looking horror flick'. The style was typical of the what you'd
see in crap like I know what you did last summer. But in very subtle
ways, the blandness gets washed away and as our heroes enter the
threshold of Hell, the style of the film changes as well. This, I
learned during the Q&A afterwards with Roth, was intentional.

If you've read some of the other reviews posted here from people who
saw it at the Toronto Film Festival, you get the general idea of the
story. Contrary to what you might've heard, this is not a 90 minute
film on torture. The torture scenes are brief and to the point. Roth
doesn't wallow in pointless gore. And this is where I think it shows
how he's improved as a filmmaker. He's more interested in scenes and
ideas that move the story forward. Yes, there is plenty of gore, but
it's relevant to the story and doesn't exist just for it's own sake.

One of the aspects of this film that made it so powerful was how Roth
created a sense of helpless and inevitability. He provides the dark
setup, throws in a sympathetic character, and begins twisting the
screws and ratcheting up the suspense. This isn't a movie where you
turn off your brain to enjoy it. On the contrary. The more you think
about it, the more horrifying it becomes. You begin putting yourself
into the character's situation and wondering what you'd do. When you
realize that there is no hope for the character, no way to escape, no
'buddy' who's gonna turn up at the last minute to save the hero, and
not a shred of humanity or compassion to the antagonists, real fear
begins to set in.

Another great element in the script is how the 'survivor' makes moral
choices that define their character. Instead of being merely reactive
like the characters in Cabin Fever, the survivor makes several
decisions which change the course of the story. It's a sign of well
thought-out script and a filmmaker who cares about the fate of his
characters.

For horror fans, this is an absolute must-see. It's so refreshing to
see a horror movie that actually makes you feel uncomfortable and one
in which you have no idea what's going to happen next. As for the gore,
I was surprised by what they got away with. Although there were no
credits at the end of the film, the cut I saw was rated R by the MPAA
and according to Roth, he didn't cut anything out.