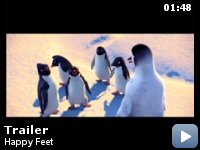 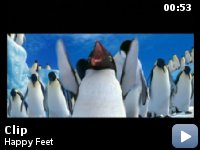 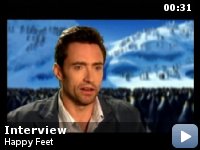 Into the world of the Emperor Penguins, who find their soul mates through song, a penguin is born who cannot sing. But he can tap dance something fierce!

Storyline
This is the story of a little penguin named Mumble who has a terrible singing voice and later discovers he has no Heartsong. However, Mumble has an astute talent for something that none of the penguins had ever seen before: tap dancing. Though Mumble's mom, Norma Jean, thinks this little habit is cute, his dad, Memphis, says it "just ain't penguin." Besides, they both know that, without a Heartsong, Mumble may never find true love. As fate would have it, his one friend, Gloria, happens to be the best singer around. Mumble and Gloria have a connection from the moment they hatch, but she struggles with his strange "hippity- hoppity" ways. Mumble is just too different–especially for Noah the Elder, the stern leader of Emperor Land, who ultimately casts him out of the community. Away from home for the first time, Mumble meets a posse of decidedly un-Emperor-like penguins–the Adelie Amigos…

Initially, Prince refused to allow the use of his song, "Kiss", for the film. However, after seeing footage of the film, he not only changed his mind and allowed the song to be used, but also wrote an additional original song for the film to use in the closing credits.

Revealing mistakes:
During the scene where we see Memphis and Norma Jean finding each other in the crowd (when the females are returning), one penguin in the center of the screen walks through another penguin.

Penguin #1:
[singing]
Once there was a way to get back homeward.

Penguin #2:
[singing]
Are the stars out tonight?

Penguin #1:
[singing]
Once there was a way to get back home.

Penguin #2:
[singing]
I only have eyes for you.

Penguin #1:
[singing]
And I will sing a lullaby.


I saw this film on October 2nd, 2006 in Indianapolis. I am one of the
judges for the Heartland Film Festival's Truly Moving Picture Award. A
Truly Moving Picture "…explores the human journey by artistically
expressing hope and respect for the positive values of life." Heartland
gave that award to this film.


It's not easy being a young penguin when you can't sing and singing
well is how you find your one true soul mate. The mating happens when
young couples are attracted to each other's own rendition of their
heart song. And to make matters even worse, the young penguin, Mumble,
is a natural tap dancer, which is not appreciated by his parents or his
teachers or the penguin colony. And to top it all off, there is a
shortage of fish and no one knows why.

The unhappy young Mumble runs into 5 small Latino penguins from another
penguin colony and the adventure takes off. The story line cuts back
and forth between the fish shortage environmental mystery and Mumble's
attempt to be attractive to Gloria, his love interest. Along the way he
runs into penguin eating birds and penguin eating mammals and almost
alien-like man made machines.

This is a musical comedy animation and the songs are classic rock and
the dance routines are Broadway-theater clever and these songs and
dances never stop throughout the film.

Mumble is a loser in the eyes of his peers, and feels a lot of pain.
But he is also heroic and brave and optimistic and he never gives up.
Those traits do not let him down. Mumble can pass on an important
message to young people. It's your attitude that can carry you through
successfully in life. It is not always about physical attributes and
physical beauty.