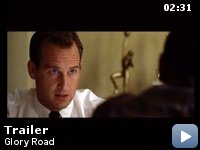 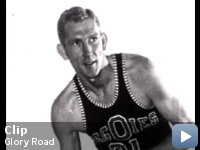 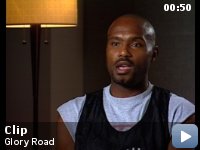 Storyline
40 years ago, Don Haskins went on the recruiting trail to find the best talent in the land, black or white. 7 blacks and 5 whites made up the legendary 1965-66 Texas Western Miners. They were mocked and ridiculed for their showboating and flaunting of black players on the court. Yet, in the face of seemingly insurmountable odds, Haskins and his Miners came together as a team united to reach the National Championship game against powerhouse Kentucky.

Taglines:
The incredible story of the team that changed the game forever.

Factual errors:
In several action shots, the actor playing Willie Cager wears a "01" jersey. In college basketball, 01 is not a regulation number.

Coach Don Haskins:
[while recruiting Orsten Artis]
Brother, without a little work I don't think you can get past an old timer like me

Orsten Artis:
Get past you… I will go past you, through you, over you, under you, around you. As a matter of fact I will spin you like a top, twist you in a pretzel, eat your lunch, steal your girl and kick your dog at the same time… pshh get past you.

Excellent story with some artistic license


I was a Texas Western graduate in 1966 and attended the school all four
previous years that Don Haskins ("the Bear") coached the basketball
team. Of course, Coach Haskins came to TWC in 1961 and built his team
over 5 years, not in one year as the movie tells it. I went to every
home game in 1965-66 and remember every one as if it were yesterday. I
watched all of the away games that were televised, including all of the
games the Miners played in the NCAA tournament. Even though the
producers of "Glory Road" took considerable artistic license, the story
is mostly true. Here are some facts. The Miners blew away fourth ranked
Iowa during a holiday tournament that season. It wasn't even close as
the movie depicts it. The great comeback was against New Mexico in the
"Pit". When Hispanic guard David Palacio came in to play in the second
half, the team seemed to settle down and came from a 20 point deficit
to win in overtime. The incredibly close game, and probably best game
in America that year between the true best college teams in America was
the Regional final between third ranked TWC and fourth ranked Kansas
(not #1 Kentucky and #2 Duke in the final four semifinal), when Jo Jo
White made that last second basket in overtime with his foot on the
base line. The Miners went on to beat Kansas 81-80 in double overtime.
Then the Miners beat Utah in the first game of the final four. If white
player Jerry Armstrong hadn't defended against Utah's great Jerry
Chambers, a black player, the Miners probably wouldn't have made it to
the championship game against Kentucky. Chambers was beating every
defender badly, including Lattin, Shed, and Flournoy, until Armstrong
was put in to cover him. Chambers finished with 38 points, mostly in
the first half and was the tournament's MVP.


Coach Haskins is beloved by every El Pasoan, whether living in the city
now or not, and is a true American treasure. It's wonderful for the
rest of the country and the world to finally learn about "the Bear" and
his great 1966 Miner team that El Paso has known and loved for 40
years. It's much more than a basketball story, it's a story about
tolerance and what hard work and discipline can do through the
leadership and determination of a great coach and human being.

The acting was superb, especially Josh Lucas' performance as "the
Bear". His performance was spot on. The young actors playing on the
team were outstanding. The early tensions shown between the black and
white players in the movie did not exist according to the real players
on that team. The book "Glory Road" is a must read, because it tells
the true story told by "the Bear", Don Haskins, himself. I also
recommend David Lattin's book "Slam Dunk to Glory". The producers
should have shown the real life characters, including Coach Haskins,
Pat Riley, and some of the actual 1966 players earlier in the credits,
because most of the audiences leave the theater without knowing they're
going to be interviewed. I thought that was the most interesting part
of the movie. The movie and the story deserve a perfect 10. I hope it
wins some awards.