Garfield: A Tail of Two Kitties 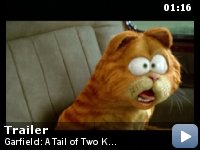 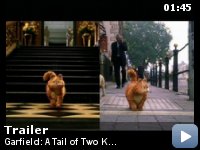 Jon Arbuckle travels to the United Kingdom, and he brings his cat, Garfield, along for the trip. A case of mistaken cat identity finds Garfield ruling over a castle, but his reign is soon jeopardized by the nefarious Lord Dargis , who has designs on the estate.

Storyline
Garfield is back and this time Garfield and his canine sidekick Odie follows their owner, Jon Arbuckle, to England, the U.K. may never recover, as Garfield is mistaken for a look-alike, regal cat who has inherited a castle. Garfield savors the royal treatment afforded by his loyal four-legged subjects, but his reign is in jeopardy! The evil nefarious stubborn Lord Dargis is determined to do away with Garfield, so he can turn the castle into a resort. Garfield's bigger, better, more perfect world is soon turned upside down in this tale of two kitties.

Taglines:
A Tail of two Kitties

Billy Connolly admitted in an interview that when he was offered the role of Lord Dargis in this sequel, he wasn't aware that the first
Garfield movie existed.

Continuity:
When the parrot lands on the table at the end of the movie, he is by three empty Coke cans. In the next shot he is still on the table, but there are no Coke cans, and something else instead.

Garfield:
Hey, Odie, it's one of those royal corgis.
[also sees the queen on the cart]

Garfield:
Hey lady, you got any leftover liver?
[no response from the queen]

Garfield:
Ah, stuck-up little punk. Oh, I know she heard it, they had the top down. Odie… Odie?
[Odie starts peeing on a British soldier's foot]

Garfield:
D'uh-oh! Odie, no, don't do the ugly American thing!
[soldier looks down at Odie]

Nice for what it is. Silly, good hearted, for kids and parents. Bit slow for adults


I did not know this was a children's movie. After all, Shrek, Monsters
Inc., Toy Story, etc., appeal to children, but are also squarely aimed
at adults. Garfield, Tale of Two Kitties is squarely aimed at younger
folk, with a few mild chuckles for the parents. It was colorful, well
done, excellent quality, etc. but let's face it, by being designed for
5-10 year-olds, it also had to be really sloooooooow.


Brekin Myer is a charming actor with good vibes. So is the chick—
Jennifer Love Hewitt. Likable people. The British supporting cast (note
that the movie starts in America, but moves to an English location soon
enough) is also excellent. Billy Connoly plays an odious villain; I
find that comedian rather odious in person, myself. But I must confess
he seemed to be a good actor— maybe his odi-osity was due to great
acting ability? Anyway— Bob Hoskins is a hoot as the bulldog, and the
other animal voices are good, too. Tim Curry was an amazing counterpart
to Garfield, playing the ultra-posh aristocratic English cat, Prince.
But again, the jokes are NOT multi-leveled. They are simple, aimed at 5
year-olds. If you take your kids, you'll like it too. If you go with
adults, you'll have a lot of cognitive capacity left over whilst
viewing it to accommodate virtually any daydreaming task.