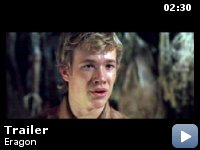 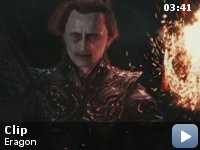 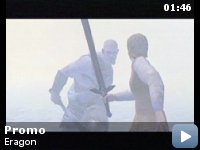 In his homeland of Alagaesia, a farm boy happens upon a dragon's egg — a discovery that leads him on a predestined journey where he realized he's the one person who can defend his home against an evil king.

Storyline
The Kingdom of Alagaesia is ruled by the evil King Galbatorix, a former dragon rider that betrayed his mates and his people in his quest for power. When the orphan farm boy Eragon finds a blue stone sent by Princess Arya, he sooner realizes that it is a dragon egg. When the dragon Saphira is born, Eragon meets his mentor Brom, and becomes the dragon rider foreseen in an ancient prophecy that would set his people free from the tyrant Galbatorix. Eragon meets the rebels Varden and together they fight against the evil sorcerer Durza and the army of Galbatorix in a journey for freedom.

Taglines:
The Next Great Fantasy

The film was advertised as "The First Chapter in the Inheritance Trilogy". At this time, the second story, "Eldest" had been published, but the third book was neither published nor named. The October after this film was released, book author Christopher Paolini announced that the final book would be split in two, making the Inheritance Trilogy the "Inheritance Cycle". (The final two books were named Brisingr and Inheritance.)

Continuity:
Eragon leaves his home without his bow, but later on in the story he suddenly has it again.

Brom:
[narrating]
There was a time when the fierce and beautiful land of Alagaësia was ruled by men astride mighty dragons. To protect and serve was their mission, and for thousands of years, the people prospered. But the Riders grew arrogant, and began to fight among themselves for power…

When the dragon Saphira gives the only good performance in the entire film, you know there is something wrong.


I saw this with a friend of mine over the weekend in a press screening
and I really did not enjoy it. The special effects are fine but the
story is rather hammy and the performances are not very good. The main
character looks like a deer in head lights most of the time and the
villains acts like cartoon stereotypes more than real characters. Most
of the characters here seem like rejects from other films and it shows
by how unoriginal they were. The only performance in the film that has
any credibility what so ever is the dragon Saphira and that's mainly
because she is voiced by Oscar winning actress Rachel Weisz, who has
more talent in her vocal cords than all the actors working in this film
combined.


My suggestion, wait for DVD.