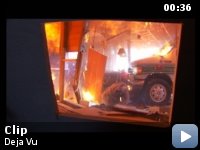 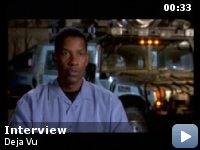 An ATF agent travels back in time to save a woman from being murdered, falling in love with her during the process.

Storyline
A ferry filled with crewmen from the USS Nimitz and their families was blown up in New Orleans on Mardi Gras. BATF Doug Carlin is brought in to assist in the massive investigation, and gets attached to an experimental FBI surveillance unit, one that uses spacefolding technology to directly look back a little over four days into the past. While tracking down the bomber, Carlin gets an idea in his head: could they use the device to actually travel back in time and not only prevent the bombing but also the murder of a local woman whose truck was used in the bombing?

Taglines:
If you thought it was just a trick of the mind, prepare yourself for the truth.

While working on the film, first assistant cameraman Michael S. Endler learned that his father, Gerald Endler, had died. As a tribute to Gerald, a former special effects technician who had actually worked with many of this film's effects crew decades earlier on other projects, Michael was allowed, on the day of shooting the ferry explosion, to place some of his ashes on a gasoline-filled water jug that would be blown up as part of the pyrotechnics of the sequence (which was referred to on call sheets as the "Stumpf Ferry Gerald Endler Memorial Pyro Blast").

Revealing mistakes:
During Claire Kuchever's autopsy, when her head is turned toward the camera, her eyes follow a distant fixed point, and not the rotation of her head. This causes her irises to become centered in her eyes by the end of the head turn. In other shots, her eyes are fixed looking slightly to her left.

Ferry Captain:
Can't believe it. They're right on time. Let's get these boys to their party.

U can save her…Déjà Vu


It's a real shame that everything I had read about Déjà Vu concerned
the high-powered explosions and loud clatter of guru/producer Jerry
Bruckheimer. No mention, except maybe as a footnote, was given to
A-list director Tony Scott and the magic he has woven in his past three
films. The man who brought us Top Gun has seen a sort of revival in
style lately with the entertaining Spy Game, the amazing Man on Fire,
and the kinetic Domino. Scott has taken the quick cuts of music videos
and has infused them into his shooting style. His editor better be
making some good money as these films fly by with filters, jump-cuts,
grain, and camera angles swiveling at every turn. Greatly overshadowed
by brother Ridley Scott and his more serious, award-winning epics, Tony
has been pumping out some of the most solid and entertaining films of
the past couple decades. With a reuniting of semi-regular star Denzel
Washington, Déjà Vu proves that when Bruckheimer is paired with a like
mind, his usual drivel can become great. Scott shows us how to hone the
explosions, noise, and clutter to an effective level and gives us a
helluva ride.


Déjà Vu could have easily reduced itself to timetravel farce, going by
the books to show a time warp in order to solve a crime. The
far-fetched premise of being able to see the past as it happens four
and a half days later should seem crazy and by watching the previews
you are given the idea that it will be just a series of do-overs.
Fortunately the trailers these days show a totally different movie than
what has been crafted. Scott and his screenwriters have not only
developed a sci-fi tale seeped in enough reality to at least be looked
upon as plausible for the sake of the story, but they nicely tidy up
any chance of their being a plothole. Our story begins with a
devastating domestic terrorist act upon a ferry carrying over 500
people, Navy and family. Washington's ATF agent is brought in and
discovers that it was no accident. Intrigued by the efficiency he
displays, an FBI agent, played with nicely effective restraint by Val
Kilmer, calls him in to check out a new toy they have to find who the
perpetrator is. During the use of this screen of the past, Denzel
acquires a feeling of obligation to do all he can to prevent what he
sees from occurring in the present, no matter what consequences that
might entail for the future. The quest to stop the violence begins with
an attractive young woman who unknowingly has become an integral part
in what will ultimately transpire.

The beauty of this film is that with multiple timelines being shown
parallel to each other, there are many questions that desperately need
answering. To credit all involved, they appear to have put themselves
in the audience's shoes and piece-by-piece wrote in a reason for
everything. Anything that is seen either in the past, present, or
future has a reason for being there and will be intelligently
explained. Also, the performances are stellar, Denzel and Kilmer as
well as a quietly maniacal Jim Caviezel and the emotionally exasperated
Paula Patton, and the visuals unique. While Scott has toned down the
ultra-kinetic cuts and filters for the main action, his style is still
stamped on the graphics of their screen showing the past. The motion
trails and speed scans lend a stylized digital editing program feel and
are gorgeous to watch. Déjà Vu's best sequence, however, is the crazy
car chase during the present in pursuit of a vehicle in the past,
definitely a rush and orchestrated almost flawlessly. Even though
Ridley gets the accolades and Tony gets the hack/overproduced label, I
must say, while they are the best directing duo in Hollywood, I might
have to give the edge on pure cinematic entertainment to the younger
Tony. He is on a roll and doesn't seem to be stopping anytime soon.