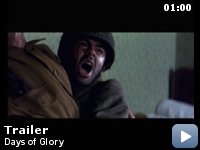 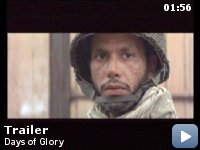 During WWII, four North African men enlist in the French army to liberate that country from Nazi oppression, and to fight French discrimination.

Storyline
Algeria, 1943, through Italy and France, to Alsace in early 1945, with a coda years later. Arabs volunteer to fight Nazis to liberate France, their motherland. We follow Saïd, dirt poor, an orderly for a grizzled sergeant, Martinez, a pied noir with some willingness to speak up for his Arab troops; Messaoud, a crack shot, who in Province falls in love with a French woman who loves him back; and Abdelkader, a corporal, a budding intellectual with a keen sense of injustice. The men fight with courage against a backdrop of small and large indignities: French soldiers get better food, time for leave, and promotions. Is the promise of liberty, equality, and fraternity hollow?

Taglines:
The True Story So Controversial, It Couldn't Be Told Until Now.

The main actors, all of North African descent, did not know of France's discrimination towards foreign soldiers serving in the French army during World War 2 until filming began.

And the award for Best Foreign Language Film goes to…


France 1943. Indigenous Moroccan soldiers – still wet behind the ears –
are called in to the 17th infantry to defend their 'motherland' against
the ongoing German occupation. Their goodness and patriotism are
unmistakable and Saïd (Jamel Debbouze) remarks how "If I liberate a
country, it's my country, even if I've never even been there." Here is
a good-hearted contingent of North African soldiers who hope to catch
some of the victory's glory, but whom are repeatedly shifted to the
backseat because of their name, skin and accent.


There was no way I would miss a film that French president Chirac cites
as the sole reason he immediately rectified the pension plan for
indigenous veterans, offering them the promise of equality for the law
for the first time. Indigènes is puffed full of political correctness
with heavy-handed treatment of salient issues such as racism,
inequality and intolerance. But we do not mind, because the film so
rigorously establishes a brotherhood feeling with our triumvirate of
central characters that we find ourselves completely engrossed in their
struggle, rooting for them, laughing with them and often crying because
of them.

In the front row for sympathy sits Saïd, Yassir, Messaoud and
Abdelkader, all inhabited by capable unknown actors with great
emotional transparency. Saïd is a kind of clumsy teddy bear who kisses
his mom goodbye in Morocco and immediately botches his way through
combat, even choking on the victorious scotch and fumbling with the
token victor's cigar when the first battle has been won. These are
heartbreakingly real people. Arguably even the hard-edged Sergeant
elicits a warm response when he unflinchingly takes on the father-role
for the contingent – he is rough, harsh, cynical but fair. The male
ensemble won the Cannes award for 'Best Actor' earlier this year, which
solidifies their collective likability and serve as a mark of the
film's warm cast centre. If you want to nitpick, it needs to be said
that some moments (such as key death scenes), although tragic,
inexplicably lack the propelling poignancy to elicit tears. Why this is
I do not know, but it ought to be attributed to the film and not the
superb performances.

When the squad of wet puppies make their way across the motherland,
they are faced with two disturbances: the internal conflicts that arise
in the army when it becomes apparent that North African soldiers are
not given the same treatment as native French (no tomatoes, no weekend
leaves, no promotions and no glory) and the gruesome reality on the
battlefield. The former is captured safely but compellingly through
little rants, intense stares and cries of "Liberté, Egalité,
Fraternité!" all in the token French political spirit. The latter,
however, is Indigènes' true goldmine. No description will do the
warfare sequences justice; they need to be seen. Think Call of Duty
plugged into the silver screen, with epileptic zooming, fast-paced
action, gory reality, humming rocket launchers and one massive sense of
immediate danger. It nearly puts Steven Spielberg's warmovie fare to
shame.

The cinematography channels one storyline from 'Babel', from the epic
aerial shots of the craggy hills and desert-laden plains of Morocco to
a juxtaposition of lush French soil. Even the French sheets are a great
source of awe for the North African soldiers. Much like 'Babel', the
film never shies away from blending equal amounts of Arabic and French
into the dialogue, something that reinforces the realism.

Indigènes (2006) is an excellent film with strong performances and a
strong, political core. Its flaws, however apparent, are generally
marginal. The one thing that jumped out and grabbed me, striking me as
below average, was the hammy and inexcusably hackneyed score. When
Arabic soldiers are fighting for their lives and bleeding in the
process, slapping on a dutiful ethnic score that sings and wails like
it means business, the film is just preaching to the choir. If I hear
an "epic, ethnic" score in a movie like this again, I will probably go
out and kill someone – either the Arab who is singing, or the stupid
Westerner who thinks mainstream audiences need everything spelled-out
for them with this mandatory music inclusion.

Aside from this minor misstep, Indigènes is a worthy merit to France's
resumé of films, one that will surely be a frontrunner for the Best
Foreign Language Film Award at the Oscars next year. Nevermind that
this is an excellent and real film, the competent political notions may
just be enough to tip things over in its favour.