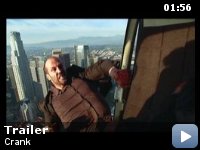 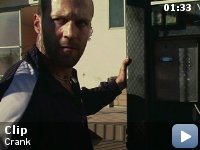 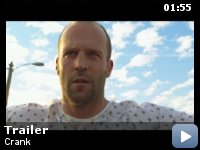 Professional assassin Chev Chelios learns his rival has injected him with a poison that will kill him if his heart rate drops.

Storyline
The hit-man Chev Chelios is poisoned by the criminal Verona and his friend and doctor Miles advises him that he must keep his adrenaline in an upper level to stay alive. Chev meets his girlfriend Eve and together he looks for Verona to kill him.

Taglines:
Was uns nicht umbringt, macht uns stark. (German Translation: What does not kill us, makes us stronger.)

Although a non-stop action film, not a single explosion occurs throughout.

Crew or equipment visible:
When Chelios is standing on the police motorcycle, in the background there are police directing traffic and a crew member on the far left.

"Crank" a fast paced, clever, and cool-as-Hell adrenaline rush of a film!!


I walked into "Crank" with low expectations, as I do with many films.
The previews made it look like it had a clever story, but I was worried
that with Jason Statham playing lead, I might just get a re-hash of his
"Transporter" films.

I got a pleasant surprise. From the very beginning, the film moves. And
moves damn fast. Not in an obnoxious way either. In the first minutes
of the film we are set up with a possible story of corruption between
hit men, a botched job, and the set-up for the whole movie– Statham's
Chev Chelios being fatally poisoned with a Chinese-made serum that
slows his heart rate, and will eventually literally make his heart
stop, killing him. The only solution– get the adrenaline pumping and
keep his heart rate up! The whole movie is like one long action
sequence, with pauses for story elements. This is the common thing now
in films, but in other movies, it generally doesn't work so well. But,
with the premise of "Crank" being the need for speed (Literally), the
idea of all-action, little-plot actually works. And works well.

However, don't be mistaken, there is genuine plot in the film. Clever
stories about the pasts and workings of crime-lords and their cronies,
and how they all relate to Chelios. Some of it went over my head
because of the constant action, but I was able to understand everything
enough to enjoy the film.

The direction and editing is something I want to talk about briefly
before I wrap this up. For a film like this, one would expect flashy
camera work and crazy fast cutting, but I must say, the director/writer
and the editor went beyond the call of duty. The film is shot as though
the cameraman himself was the one who was poisoned, with the camera
flashing and moving around nearly constantly, only settling during the
slow scenes. Quite a genius use of camera-work to emulate the story.
And the editing certainly adds a lot to the already excellent camera
work. We get cutting when necessary and when not necessary, to further
illustrate the needs of the main character.

Overall, I would say "Crank" was the coolest movie I've seen in the
last several years, leaps and bounds beyond the standard Hollywood
action flick. I would recommend to any action-fan or adrenaline junkie,
because take it from me, this film is the ultimate rush!