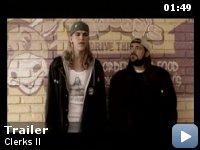 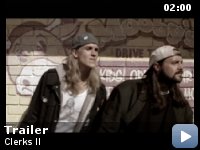 A calamity at Dante and Randall's shops sends them looking for new horizons – but they ultimately settle at Mooby's, a fictional Disney-McDonald's-style fast-food empire.

Storyline
A calamity at Dante and Randall's shops sends them looking for new horizons – but they ultimately settle at Mooby's, a fictional fast-food restaurant. Free from his dead-end job (and lodged in a new one), Dante begins to break free of his rut, planning to move away with his clingy fiancé. Dante is ready to leave the horrors of minimum-wage New Jersey behind, but Randal – always the more hostile of the two – starts to become overwhelmed by his own rancor.

Various elements from this movie came from a script Kevin Smith wrote in 1994 which was never produced, called "Busing" for Hollywood Pictures. It was described as "Clerks in a restaurant" and was very similar to
Clerks. and
Mallrats.

Dante Hicks:
[on his cellphone]
Yeah, I got a fire at the Quick Stop. Yeah.

CLERKS II – A great conclusion to the NJ saga!


This movie was everything I hoped it would be. It is especially (or
maybe even primarily) for fans of Kevin Smith's "ViewAskewniverse".
(And yes, it's in color…mostly.) Also, there was no subtitle…it was
titled simply "CLERKS II"…no "the second coming" or "the passion of
the CLERKS".


I don't want to hit any spoilers this soon before the movie comes out,
but the general idea is that it is a "coming of age" story for the Gen
X slackers, who finally in their 30s find themselves not having
advanced very far in life, careers, personally or even in general (this
is primarily Dante's role, anyway). He decides (due to some things
beyond his control) to FINALLY move on, "grow up", get married and
leave Leonardo New Jersey and its band of bad influences behind.

Randall, of course, is not so keen at his only friend leaving NJ, is
perfectly happy living with his parents and doing as little as
possible, and a good part of the movie is spent on Randall challenging
Dante's decision and exploration of their friendship.

Now, this may sound like some kind of melodrama, BUT IT ISN'T!!! That
basic story is weaved between the plot devices, smart dialogue and
gritty or "pushing the limits" humor we come to expect from Kevin
Smith.

There's Jay and Silent Bob of course, who have a mini-character
arc/growth experience themselves, Jason Lee in with an all new
character for one short scene (I think this is his 5th new character in
Kevin's ViewAskew franchise), and Ben Affleck with a mercifully brief
(one or two line) cameo. Jay and Bob's antics are always a great break
from the other action, never an intrusion, even when they are TRYING to
intrude, by making asses of themselves (literally) in the background of
the primary action.

Plus, a couple of new characters, a crew member at Mooby's (a
McDonald's type fast food joint) named Elias who is a very religious,
naive counterpoint to Randall's ruthless and jaded personality, and
therefore the butt of many jokes/gags. His and Randall's comments
regarding "Lords of the Ring" vs "Star Wars" are priceless and vintage
Kevin Smith.

Another new character, "Becky", is played by Rosario Dawson, who is the
manager at the same restaurant. She plays the part of the good female
friend who depends on Dante and challenges Dante to consider if he
really wants to settle for a girl who is merely tolerable.

As with the first "CLERKS", this movie pushes the limit of what can be
put on film and actually get released in theaters. I hope the more
controversial parts make the final cut because I think the shock value
that makes you say "NO THEY DIDN'T!" is a valuable part of the equation
and expected from this film franchise. Without giving anything away,
there are particularly two of the films ongoing jokes, one having to do
with bestiality, the other in which some very NON-PC racial terms are
used, REPEATEDLY, including the "N-word". No one else has the guts to
address these issues and make them funny. 'Cept Kevin Smith.

Finally, the movie really does have a story without being preachy,
we're treated to known characters without it being a nostalgia-fest
(for instance, Jay and Bob are in their signature places in front of
the Quick Stop, but Jay utters not once "Snootchie Bootchies"…but not
to fear, he finds a NEW way to crack us up…Bob's discovered a way to
keep Jay's mind off of drugs. Fans of Jay will NOT be disappointed.)And
the movie goes through an interesting story arc, with surprises and
twists resulting in a satisfying ending.

I'm concerned that the more risqué scenes might have to be neutered for
ratings' purposes; hopefully not. If so, they will be on the DVD for
sure. I can say that even in very conservative KC, the audience laughed
A lot, no one walked out during the most "offensive" part, and everyone
seemed to really enjoy the edgy wit, smart dialogue as well as the
bathroom humor that kept the film at a fun pace.

*EDIT-I've since read that 3 people walked out, which isn't bad from an
audience of nearly 500 and with a movie this edgy. I guess I was
enjoying myself too much to notice the walkouts!

The movie is also more realistic than some of the other View Askew
movies; more like Clerks, obviously. None of the comic book type stunts
like in "Mallrats" (Silent Bob's batman utility belt and flying around
with a cape) or "Jay and Silent Bob Strike Back" (with the fake
lightsaber scenes and flying on the bicycle through a wall and not
getting hurt) or all the special effects,mythology and divine
interventions of "Dogma" (Alanis Morisette as God appearing at the end
to save the world). There are no scenes to groan at and think "ah,
right, like that could happen". These characters are real, and real
things happen to them, no special abilities, creatures from the
underworld or new age messiahs. Just real people that many of us can
relate to.

In closing…don't take your grandmother to this movie. It is full of
obscene language, profane concepts, drug references, "unnatural" sexual
references, etc. Unless you know your girlfriend is hip and not easily
offended, test her with a DVD of "CLERKS" first to see if she "gets"
the humor.

Otherwise, get a gang of friends, go to this movie and get ready to
laugh your freakin' BUTT off!

TagsUSA
The Girl Who Leapt Through Time
The Host