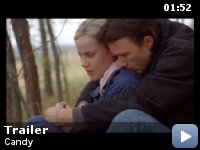 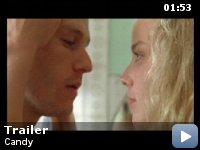 A poet falls in love with an art student who gravitates to his bohemian lifestyle — and his love of heroin. Hooked as much on one another as they are on the drug, their relationship alternates between states of oblivion, self-destruction, and despair.

Storyline
This story is a narration from an Australian man who falls in love with two kinds of Candy: a woman of the same name and heroin. The narrator changes from a smart-aleck to someone trying to find a vein to inject, while Candy changes from an actress, call girl, streetwalker, and then a madwoman. Starting in Sydney, the two eventually end up in Melbourne to go clean, but they fail. This leads them to turn to finding money and heroin, while other posessions and attachments become unimportant.

Taglines:
Love is a high you can never come down from

The man who gives Dan and Candy the milk cartons is Luke Davies, the author of the novel "Candy" the movie is based on.

Dan:
[HELL]
Everything we ever did we did with the best of intentions, but events tumbled and the years pile up, the world is very bewildering to a junkie… and still you cling to the concept of change.

Not for the faint hearted


If there is any one movie I would ever recommend to discourage someone
from trying Heroin or even to stop someone who is doing it this is the
movie I would show them.

I was somewhat blasé when my girlfriend chose this as our weekly movie
that we go see, personally I actually wanted to go see Superman
Returns, possibly because it had Heath Ledger in it, possibly because
it was just another druggie movie. I'm still not sure whether we should
have just gone to see Superman, not because it was a bad movie, quite
the opposite. I have to say that this is one of the best movies I have
ever seen (and that is quite a claim I know), but I don't think that I
could ever see it again.

That said, I would definitely recommend this to you all. It is a
brilliant piece, frighteningly realistic, intense and very powerful. I
never wanted to try Heroin ever and this film certainly hit that home.
If I ever hear someone say they want to try it normally I would just
call them an idiot and leave it alone, but now I think I would
absolutely go off at them. This movie certainly cannot be accused of
glorifying drugs.

Heath Ledger and Abbie Cornish totally made this movie their own. Their
chemistry is at times absolutely beautiful and wonderful, and at other
times frightening and unnerving. The number one feeling this movie left
me with was quite uncomfortable and also somewhat disturbed. And that I
believe is exactly what this movie was attempting to do, realism at
it's best. Berthold Brecht himself couldn't have done better himself.

I've never seen Abbie Cornish in anything else before this, but if her
other work is as brilliant as her performance as Candy in this film,
point me in it's direction. Abbie was absolutely brilliant, especially
in the wide range of emotions and personalities she had to portray.

My one criticism for this film (if you could call it a criticism) is
that it may be too realistic (it is almost as if someone had just
filmed this couple's life and put it in the cinema) and some scenes
could be somewhat disturbing for some people but I believe that is the
point of the film. Call it a warning.

I know this isn't exactly the most well written review and I hope it
makes sense, but this is one film I have actually been motivated to
write a review about and I thoroughly recommend it to anyone.