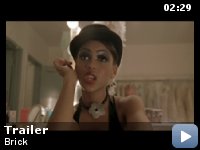 A teenage loner pushes his way into the underworld of a high school crime ring to investigate the disappearance of his ex-girlfriend.

Storyline
The lonely teenager Brendan finds his former girlfriend Emily dead in the entrance of a tunnel of sewage and recalls her phone call two days ago, when she said to him that she was in trouble. Brendan, who still loved Emily, met bad elements of his high-school trying to contact her, and when he succeeded, she told him that she was OK. He hides her body in the tunnel and decides to investigate the meaning and connection of four words, including "brick" and "pin", that Emily told him to find who killed her. Using the support of his nerd friend Brain, he successively meets the small time drug dealers Kara, Dode, Brad Bramish, Laura and Tugger, to reach the teenager powerful drug dealer The Pin. Slowly, Brendan unravels the motives why Emily was killed and plots a revenge.

Rian Johnson wrote the original screenplay in 1997. It took him six years in order to fund the project.


OK…I have never actually commented on a movie on IMDb, but this movie
was so great I really felt I had to let people know about it. When I
first read the synopsis of Brick at Sundance I was immediately
interested in seeing it. "Film Noir set in a high school." I started
hearing really terrible reviews of it and almost did not go until the
very last day I could. I am so glad I did. It is a very unique film,
such a refreshing one for people who have seen it all. So if you want
something new and different you will definitely enjoy this. Others may
find it is too over-the top for them–it took me several minutes to
understand what the characters were even saying at first, in their
language that mixed old film noir slang with the new generation of
slang. Its very dark and the sound design will even make a person feel
uneasy. The director linked sound and image in ways I have never seen,
completely enthralling me from beginning to end. This movie is not a
relaxing ride. oh! but there are great comedic and ironic moments as
well! I think a lot of the criticism I heard of this film was that it
was too incomprehensible and unbelievable. I personally really got into
the world of this film and it had me on the edge of my seat until the
very end. It was so enjoyable to buy into the rules of the film
noir/high school drama world and its characters. I did not even
recognize the lead character as that kid from 3rd Rock until the end! I
hated 3rd Rock, but I absolutely loved and believed in his character
here. I loved it! One of my top picks at Sundance this year. sorry I
have never written a review…I hope this reveals something about the
movie. I really, really hope that it gets released soon! It is one of
those interesting movies that could really be a cult classic.

TagsOK USA
Asterix and the Vikings
Ask the Dust