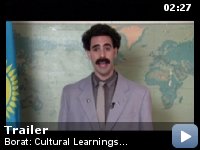 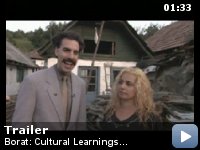 Kazakh TV talking head Borat is dispatched to the United States to report on the greatest country in the world. With a documentary crew in tow, Borat becomes more interested in locating and marrying Pamela Anderson.

Storyline
Borat Sagdiyev is a TV reporter of a popular show in Kazakhstan as Kazakhstan's sixth most famous man and a leading journalist. He is sent from his home to America by his government to make a documentary about American society and culture. Borat takes a course in New York City to understand American humor. While watching Baywatch on TV, Borat discovers how beautiful their women are in the form of C. J. Parker, who was played by actress Pamela Anderson who hails from Malibu, California. He decides to go on a cross-country road trip to California in a quest to make her his wife and take her back to his country. On his journey Borat and his producer encounter a country full of strange and wonderful Americans, real people in real chaotic situations with hysterical consequences.

Taglines:
Come to Kazakhstan, It's Nice!

Continuity:
When Borat is running out of the room at the Jewish Bed & Breakfast, he is empty-handed. However, when he reaches the bottom of the stairs, he is carrying his bag.

I literally could not stop laughing.


And I mean the actual definition of "literally." I was lucky enough to
catch an advanced screening and I wish I could see it 100 more times.

It's hilarious. It's offensive. It's actually pretty smart as well.
Sacha Cohen is so ridiculously consistent and never seems to break
character, even when he turns an entire rodeo against him in less than
5 minutes.

I really don't want to speak anymore of the film, because part of the
beauty of it is being surprised by what you see on the screen. I only
hope they don't edit the hell out of it, because it really was a joy to
see as it was.

TagsTV USA
Tell No One
Stranger Than Fiction