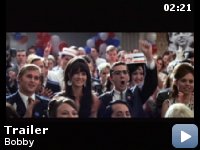 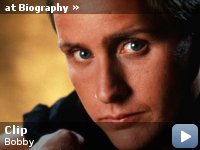 The story of the assassination of U.S. Senator Robert F. Kennedy who was shot in the early morning hours of June 5, 1968 in the Ambassador Hotel in Los Angeles, and 22 people in the hotel whose lives were never the same.

Audio/visual unsynchronized:
When Tim starts playing drums with the band, the sound of the cymbal doesn't match what he's playing.

Miriam:
That poor woman… I used to be such a fan

One of the best of the year


If you're sitting in the back row of a theater, hiding your tears as
the credits roll for a movie, you know it delivered the emotional
effect it was aiming for. I was lucky enough to catch "Bobby" at the
Toronto Film Festival — its North American premier — and what I got
was an incredibly beautiful story, cinematically gripping to say the
least.


Like in all great ensemble movies, "Bobby" offers a stellar cast, none
of whom disappoint. From the neurotic and self-conscious character of
Samantha (played by Helen Hunt) to the outspoken, confident Edward
Robinson (Laurence Fishburne), there is a vast mixture of personalities
that work to provide a complex interwoven plot line. But the most
notable performance (and the most surprising) is that of Virginia
Fallon. Brillianty portrayed by Demi Moore, Virginia is a foul-mouthed,
insecure alcoholic who sways around on screen in delicate form, both
heartbreaking and beautiful to watch.

Director-writer Emilio Estevez put his heart into this project. The
direction is without a doubt highly impressive. The subtle colorful
hues reflect the emotional grip of each scene, and extenuate a modern
feel to the film. He puts us head-first in the crowd that witnessed the
assassination of Robert F. Kennedy, on what would seem to be one of the
most heartbreaking moments in American history.

But what really stands out in this movie is not the screenplay, nor
directing, nor acting. The emotional intensity is brilliantly brought
out through the use of sound. An actual audio footage of RFK is heard
in the background as the tense score sways by over the muted dialogue.
And what works for this type of film-making is the amount of
anticipation it builds up, and even after pivotal scenes, the impact it
leaves on the audience.

There is a key scene in the movie in which all the characters prepare
to greet RFK when the energy of the entire screen seemingly drips with
positivity towards the American society. It's as though we forget the
fatal tragedy and give into the thought of this story having a happy
ending. We are reminded of classic ensemble films such as "Short Cuts",
"Magnolia" and "Crash" and immediately juxtapose that feeling.

Though I do fear that politically this movie may not hit home for a lot
of the critics once it hits a wide release, it is definitely going to
leave a lasting impression on the majority who sees it. It's a movie
that presents a magnificent cast, superb directing, and flawless
scriptwriting. An undoubtedly obvious ingredient for the Awards season.