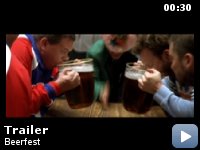 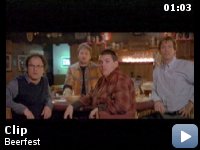 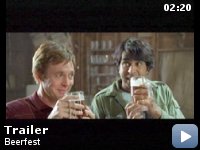 Two brothers travel to Germany for Oktoberfest, only to stumble upon secret, centuries-old competition described as a "Fight Club" with beer games.

Storyline
After the death of their grandfather Johann von Wolfhause, the brothers Jan and Todd Wolfhouse travel to Munich to fulfill a family tradition, spreading the ashes of Johann during the Oktoberfest. Their contact brings them to a secret beer competition, the Beerfest", where they are offended by Baron Wolfgang von Wolfhausen and the German branch of their family that accuse their great-grandmother of being a prostitute and their grandfather of stealing an old recipe of the best beer in Germany. Jan and Todd returns to USA humiliated and decide to organize a beer team to dispute the next Beerfest. They join Landfill, Barry and Fink and train long the year to participate in the competition. When they find the lost recipe hidden in a dummy, they feel that their German relatives told the truth. But the team is ready for the tough dispute.

The large, beer-filled, boot-shaped glass termed "Das Boot" in the movie served as the grand finale' of all of the drinking games. Actually "Das Boot" translates as "the boat" in English. "Der Stiefel" would be the correct German terminology for "the boot." Such "beer boots" are known as "Bierstiefel" in Germany. They are descended from the centuries old German soldier's tradition of accepting the challenge to drink beer out of another's boot.

Errors made by characters (possibly deliberate errors by the filmmakers):
Todd plays in the final game because the Germans claim he has not participated in any of the events, which breaks the rules of Beerfest. However, he is seen (poorly) playing Beer Pong against the English team shortly after the competition begins. One possibility is that every team member must participate in every round.


Let me start by saying that I loved Super Troopers. Club Dread on the
other hand was not one of my favorites. So i was hoping that this would
be better than Club Dread but I did not think it could even compare to
Super Troopers. But was i wrong. This movie was absolutely hilarious.


I just don't understand why people are giving it terrible reviews. It
was the funniest movie I have seen in theatres in a long time(as well
as Clerks II). I understand the lack of plot but who says lets go see
Beerfest, it will probably be a great epic? I went to see people drink
beer, get wasted and do stupid things and thats exactly what I got.

I laughed from the beginning to the end of the movie, there was not a
dull moment in the whole thing. And when the American team was
competing against the other countries, I was cheering as if i was
watching a real professional sport.

So, if you are looking for a good laugh and an all around good time go
see Beerfest you will not be disappointed.