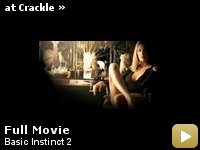 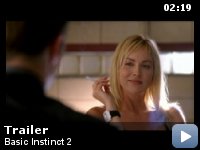 Novelist Catherine Tramell is once again in trouble with the law, and Scotland Yard appoints psychiatrist Dr. Michael Glass to evaluate her. Though, like Detective Nick Curran before him, Glass is entranced by Tramell and lured into a seductive game.

Storyline
Crime novelist Catherine Tramell is living in London, and becomes the center of police investigation (yet again) when her football player boyfriend drowns in a car accident and it is revealed that he was already dead because of a drug overdose before Tramell drove the car into water. Police psychoanalyst Dr. Michael Glass is called for examining Tramell, and is intrigued by the seductive and manipulative woman. On the other hand , his friend Det. Roy Washburn is sure Tramell is guilty. Tramell asks Glass to treat her for her 'risk addiction' problem, and with each therapy session , Glass gets more and more suspicious about her intentions. As more and more murders are committed, including that of Glass's ex-wife, Glass becomes obsessed with proving Tramell's guilt even though the evidence is contradictory .

Taglines:
Everything interesting begins in the mind.

The setting was changed from New York to London. Harrison Ford, Viggo Mortensen, Benicio Del Toro, and Aaron Eckhart were in the running for the lead when the film was initially set in the U.S.A. Jude Law, Ewan McGregor and Gabriel Byrne were nominated after the move. Javier Bardem was also considered at some point.

Dr. Michael Glass:
I'm not the one on trial for murder.

Catherine Tramell:
Not yet.


Well, I saw this movie yesterday and it's – unfortunately – worse than
you could think. First of all the plot is idiotic, it has no sense at
all. The screenplay is full of intentionally funny dialogues. The
audience was laughing many times. And the suspense is very low. Actors
play so-so, with an exception of Sharon Stone, who has some good
moments but also some awfully bad acting moments. The saddest parts are
when she tries to be aggressively sexy and says things like "I want to
*beep* you " and it looks like, let's say it gently, a very very mature
woman acting rude and not sexy at all. That erotic tension from BI1 is
totally gone. From the technical point of Basic Instinct 2 is a
mediocre movie – better than typical straight to DVD, but on a far
lower lever than the original movie. For instance the scene of crazy
joyride is done poorly. The director of Basic Instinct 2 is no Paul
Verhoeven and it shows. The new composer is no Jerry Goldsmith and its
shows. The script is done by people who are no match for Joe Eszterhas.
There's no substitute for Michael Douglas in it. The film looks cheap
and badly edited at times. I'm sorry but my first thought after I left
the theater was: "Why heaven't they made this movie earlier and with
original talents behind the success of the first movie?" All to all the
original movie is like Citizen Kane compared to this. The first Basic
Instinct is a classic and was a kind of break-thru in the popular
cinema. It was provoking, sexy and controversial. It had the best
Sharon Stone's performance in her career. It had this specific Paul
Verhoeven's style. Unfortunately Basic Instinct 2 is a unintentionally
funny movie, badly directed and a sure Razzie Award Winner in many
categories. It's a pity that they made this film.