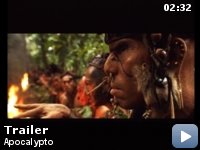 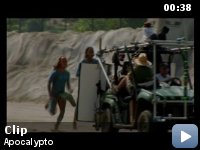 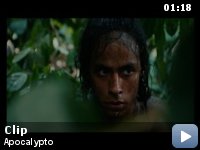 As the Mayan kingdom faces its decline, the rulers insist the key to prosperity is to build more temples and offer human sacrifices. Jaguar Paw, a young man captured for sacrifice, flees to avoid his fate.

Storyline
In the Maya civilization, a peaceful tribe is brutally attacked by warriors seeking slaves and human beings for sacrifice for their gods. Jaguar Paw hides his pregnant wife and his son in a deep hole nearby their tribe and is captured while fighting with his people. An eclipse spares his life from the sacrifice and later he has to fight to survive and save his beloved family.

Taglines:
When the end comes, not everyone is ready to go

The Jaguar's attack in the film is portrayed accurately, with the cat attacking the skull, rather than the throat. Unique among the other big cats, as where Lions, Cheetahs, Tigers, and Leopards asphyxiate their prey with a bite to the throat, Jaguars kill with a penetrating bite to the brain.

Anachronisms:
The buildings in the city co-mingle architectural styles from three separate Mayan civilizations: Tikal Classic Maya (800 CE), Puuc (c.1050 CE), and El Mirador, a Pre-Classic metropolis that existed around the year 1 CE. If they wanted to portray Aztecs, this was definitely not their architectural style. If they wanted to portray Mayans, those civilizations disappeared long before the arrival of European ships.

title card:
"A great civilization is not conquered from without until it has destroyed itself from within." W. Durant

I couldn't believe two hours had gone by that quickly


Having some Mexican-Indian blood in me, I've always been interested in
what I could read about the Aztecs and Mayans and others. But never did
I achieve as elaborate a vision in my head, try as I might, as Mel
Gibson has with the beautiful Apocalypto. Is it accurate? I've more
than just strong doubts in at least one case, but like all good
fiction, it probably tells more truth, despite its inaccuracies, than a
dozen scholarly tomes. The movie is engrossing and, even more
difficult, plausible and quite evocative. I would have bet any amount
of money that this movie was impossible to make. And though some have
complained that the film's ending involves an historical inaccuracy, I
think there was more than enough reason to put it in.


There's a strong story that reminded me of other Third World folklore
I've read, only better. In a lot of ways these people could have been
North American Indians, but somehow that's not much of a criticism. And
Gibson's recent PR problems only highlighted, for me, how it took an
Australian-reared actor to make an exciting film about natives before
Columbus. Clearly Hollywood is incapable of even conceiving of such a
movie, much less bringing it brilliantly to life. Hollywood has an
agenda and very narrow perspectives. It's agenda has no room for
illuminating the humanity of non-Westerners, and there's too much
relying on the same old set of sensibilities and intuition. I think if
Hollywood is up in arms it ought to be because Gibson is making them
look inept.

But as to this particular subject matter, there's no doubt in my mind
that what fascinates most Anglos about the Aztecs and the Maya is the
idea of human sacrifice. Gibson depicts the ritual as having an element
of frenzy to it, and he may be right, but what is more convincing to
me, at least, is his idea of what a village raid must have been like.
His point by point reconstruction is pretty compelling, and I'm quite
sure he could make some early American military raids on Indian
villages so vivid and unforgettable that grown men would cry. I only
hope he does, but as to this film, I would have depicted the human
sacrifice with a nod toward a notion most Anglos find completely
foreign, namely that these people understood that gain often entails
pain, and they were willing to pay the price. Was it really so
unreasonable that these people thought God might want them to create
pain, and not just endure it, to gain His favor given that life entails
so much struggle anyway? That willingness to endure pain clearly
survives today, not the desire to create it in others, and that's the
only point I would have added to this wonderful film.