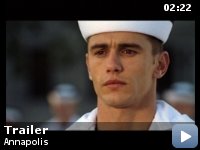 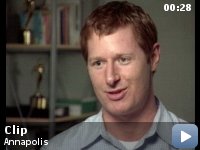 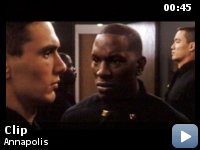 Set against the backdrop of boxing at the Naval Academy, centers on a young man from the wrong side of the tracks whose dream of attending Annapolis becomes a reality.

Storyline
Jake Huard, from a shipbuilders family, promised his dying mother he'ld make it to Anapolis Naval Academy. Thanks to tenaciously bugging a Congressman, he's selected despite dubious grades. Once inside, Jake soon proves sub-standard academically. Constantly challenged to his limits, repeatedly made the 'over-cocky' reason for the entire class to suffer, Jake nearly quits, but after facing his utterly un-supportive father's gloating returns just in time. Stubborn Jake finds support withs mates as well as Senor Ali, his lover-to-be, and a discipline he may excel in: the 'brigade' boxing tournament, open to all ranks.

Taglines:
Where Heroes Are Born And Legends Are Made.

Errors in geography:
There is no shipyard anywhere near the Naval Academy in Annapolis, MD. The academy is surrounded by very ritzy suburbs.

Cole:
I want you all to remember what that bag looks like with a body in it, because if you become officers this is where they're going to put your mistakes.

Not my Naval Academy

I graduated from the Naval Academy in Annapolis, MD in 1988. I went to
see the movie with my wife, an ex Navy Nurse, last weekend. We were
eager to see the familiar grounds of the Academy and see an accurate
depiction of the real Midshipman experience.

Okay, by now you've read plenty of comments regarding the plot
(predictable), the acting (cardboard) etc. As a remake of the whole
"Officer and a Gentleman" theme, it's not too bad. The whole poor boy
with an attitude bucking the system thing has been done.

If you are planning to see the movie hoping it's a realistic depiction
of life at the Naval Academy, or in the military in general-don't
bother. They actually got a few things surprisingly right, and many
more things wrong. Therefore, I thought I'd give a little insider's
look at the nit-picky details.

What they got right: The uniforms, by and large. It's not likely that
every single Mid would have scored Expert on their rifle and pistol
qualifications- but they all seem to have earned those ribbons. BTW-
Jordanna Brewster's character was a Second Class Midshipman- a Junior.
Tyrese was, as he said, a Senior.

The rooms- pretty close. Actually, the showers are in the rooms.

The bedspreads- Strange, but true. Little details like the Plebe
sleeping on top of his covers so he won't have to remake the rack.

The Plebe Indoctrination- The apparently silly memorized responses to
questions like "How's the Cow?" (-She walks, she talks, she's full of
chalk. The lacteal fluid extracted from the female of the bovine
species is prolific to the Nth degree.) It's designed to train you to
be able to rapidly and accurately memorize complex information strings.
Obviously it still works- I learned it 22 years ago and still know it
verbatim. Marching off demerits- yep, done it. The chowcalls- yelling
the menu in the passageway. Cannonballs with Hard Sauce! Yum!

Expulsion for an Honor Offense- Apparently someone caught lying today
would be put on Honor Probation. Twenty years ago, anyone violating the
Honor Code (not concept) was separated.

Boxing- All MALE midshipmen were required to take two semesters of
boxing- your Plebe and Youngster (sophomore) years. The boxing coach
was excellent. He fit the part very well. There was an open tournament
each year, but it's held in a big field house, not a dark and dusty
courtroom set. It's really not that big a deal to most mids.

Jumpers- People have committed suicide by jumping from windows in
Bancroft Hall- the residence hall.

What They Got Wrong: The Academy- They found some period buildings in
Philly with lots of columns, etc. The locations in no way captured the
feel of the Academy or the city. Annapolis is a beautiful tourist city
(and the state capital) on the Chesapeake Bay. The nearest shipyard
would be in Baltimore- and they don't build warships there.

The Military Discipline- Plebes don't saunter down the P-way (hall)
they march or run. Nobody goes outside in uniform without a cover
(hat). Most of Huard's responses to his superiors would have gotten him
fried. Conversations are not casual, and they're usually one way.

The boxing- again, not that important. Females don't box. (Or didn't 20
years ago.) Nobody boxes without protective headgear-NCAA rules (only
pro's can be that stupid.)

Twins- one of the best acting jobs- and totally unrealistic. There are
no fat plebes. You have to be in top shape just to get in- there are
physicals and athletic evaluations. You eat 4,000 to 5,000 calories a
day during Plebe summer, and still lose weight. I lost 10 pounds.
Anyone overweight is put on a restricted diet.

Midshipman Authority- A Firstie, regardless of his stripes, is not
going to be timing the obstacle course and then making separation
decisions. A midshipman's training costs hundreds of thousands of
dollars- only qualified officials will separate someone, and only after
every attempt at remediation has failed. Bottom line- nobody with that
low a degree of self-discipline will survive to commissioning. You have
to want to be there yourself- not for someone else.

Free Time- There isn't any Plebe year. Huard certainly wouldn't have
been in the boxing gym after dark alone. (or with an upperclass
female.)

Fraternization- Jordanna's character, as the senior member, would know
better than to fraternize with (kiss) a subordinate. He was strictly
off-limits until the end of his Plebe Year. It happens- but wouldn't be
obvious (jogging together?)

Plebes No More- WTF was that? Only graduates throw their covers in the
air.

By the way, Wahlburg (sp?) was a Lieutenant Commander; they kept
calling him Lieutenant.

The list goes on, but this is just a small sampling of the accurate and
inaccurate points of this forgettable movie. They could have fixed the
script, gotten competent advisors, and made a much better movie without
any additional budget. It costs the same to film them doing something
right, rather than wrong. I can see why the Academy Administration
distanced themselves from this project.