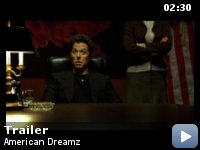 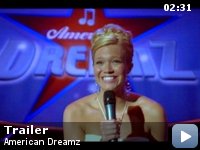 The new season of "American Dreamz," the wildly popular television singing contest, has captured the country's attention, as the competition looks to be between a young Midwestern gal (Moore) and a showtunes-loving young man from Orange County (Golzari). Recently awakened President Staton (Quaid) even wants in on the craze, as he signs up for the potential explosive season finale.

Storyline
Martin Tweed is the host of a talent show called American Dreamz, and whilst he despises each new season, it's a hit with the ratings. Tweed decides it's time for a new and interesting batch of contestants, and sends out his team to find the weirdest bunch possible. Whilst all this is happening, the President of the United States is becoming more and more depressed, and relies on his Chief of Staff to talk him through everything, even into appearing as a judge on the TV show. Perfect news for the terrorists who use the talent contest as a way to reach the President.

Writer/director Paul Weitz claims that he wrote the original draft of the
American Dreamz script before he had ever watched an episode of
American Idol.

Sally Kendoo:
I think it's time we broke up. Your life is here,
[puts her hand low]

Sally Kendoo:
my life is here
[makes a rocket-like motion blasting off]


Perhaps this film has gotten mixed reviews because it breaks an
unwritten code about how far a movie can go in satirizing America's
myths. When before have we seen the President of the United States on
happy pills and robotic-ally pro- gram-med by his Rovelike handlers ?
Who would suggest that an Al-Quaeda training camp could be funny and
that someone in it has up scale all-American relatives in Orange
County, California ? Could our love affair with American Idol be an
escape from the collapsing American middle class way of life ?

This film IS often funny but it doesn't want that humor to stay in a
feel good zone. It WANTS to make us uncomfortable and to face things
that we don't want to look at too closely. The "sin" that this film has
committed is that it wants us to grow up.