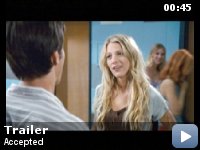 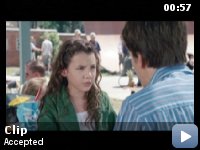 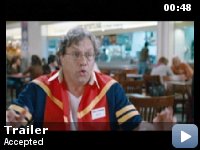 A high school slacker who's rejected by every school he applies to opts to create his own institution of higher learning, the South Harmon Institute of Technology, on a rundown piece of property near his hometown.

Storyline
Bartleby (B.) Gaines is a fun loving slacker who, unfortunately, gets turned down for every college he applied for, much to the chagrin of his overly expectant parents. So, with a little cutting and pasting, he creates the South Harmon Institute of Technology, and lo and behold, he is accepted (along with his friends Rory, Hands, and Glen, whose college plans were also all but dashed). However, his parents want to see the website, the campus, and the dean. So now he has his other friend Sherman (who has been accepted to the prestigious Harmon College) build a web page, they lease out an abandoned psychiatric hospital, and they hire Sherman's uncle Ben to be the dean. Problem solved? Not quite. The web page was done so well, that hundreds of students show up at the front door, all of which were turned down by other colleges. Faced with no choice, Bartleby decides to proceed with turning South Harmon into a real college…

Most of the movie was improvised, and a lot of the gags were pitched by the actors on the day of shooting.

Crew or equipment visible:
When Bartleby and crew are walking into the "college" and the skateboarders come riding out, the angle changes and we see the camera men in the right of the screen.


I don't think I've yet seen a movie in my whole lifetime about a high
school kid creating his own college, just to impress his parents.
Nowadays, movies are either remakes or sequels, or plots that have been
used in many different films. This one has an original story line and
to follow it up by making it a comedy films only lightens the deal.
With this well thought out story and with laughs mixed in, this is a
good movie. Now I've seen better, but upon going into the theater I was
thinking another drug/beer/frat party with some sexual innuendo tossed
in (aka an "American Pie" flick) but I was surprised. To sum it up, I
enjoyed the film and the next time your shuffling through the paper for
movies, look for show times to "Accepted". If you want to laugh out
loud, that is.