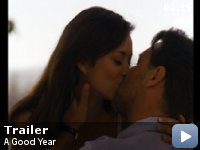 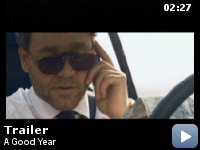 A British investment broker inherits his uncle's chateau and vineyard in Provence, where he spent much of his childhood. He discovers a new laid-back lifestyle as he tries to renovate the estate to be sold.

Storyline
After years of no contact with his Uncle Henry, London banker and bond trader Max Skinner learns that Henry has died intestate, so Max inherits a château and vineyard in Provence. Max spent part of his childhood there, learning maxims and how to win and lose, and honing his killer instinct (at chess, which serves him well in finance). Max goes to France intent on selling the property. He spends a few days there, getting the property ready to show. Memories, a beautiful woman, and a young American who says she's Henry's illegitimate daughter interrupt his plans. Did Max the boy know things that Max the man has forgotten?

According to director/producer Ridley Scott, every scene of the film was shot within eight minutes of his home in Provence, where he has been living for 15 years.

Continuity:
The sunburn marks on Christie Roberts do not match the bikini she was wearing at the pool.

Francis Duflot:
[Offering his hand]
A Frenchman's hand is his word… Concord?


This is definitely the first time I have gone to see an Russell Crowe
and/or Ridley Scott film at the cinema, fully bracing myself to be
disappointed and…

I am very pleased to be able to say that I enjoyed it thoroughly. It
has a very warming glow to it – beautifully played; gorgeously shot.
Anyone who isn't just a little bit seduced by Provence after seeing it
needs their head (or more likely their heart) examining. The lessons
may well have been taught in a hundred films before, but that doesn't
make them any less relevant or resonant for the commercial era in which
many of us now live…

So, why the terrible reviews? I really don't know. The comedy was not
overplayed in the way implied by the critics at all. To be blunt, it
was not really necessary, as the warmth and effectiveness of the film
and story lies in the romantic drama. The comedy is fine, but doesn't
really add anything to the film. However, it does give it a very
upbeat, cheerful and likable feel and maybe that is reason enough.

Max's character and Russell Crowe's performance? It's in the quieter
moments where Crowe really excels and shows just why someone would want
to cast him, as opposed to say Hugh Grant, in a film like this. His
reactions to memories and the things that other characters do and say
are just so much deeper and more real than Grant is capable of: which
is why Grant always comes off as the same character in these films (a
variation on the Grant formula) and Max comes off as real.

Also, the critics seem to be completely off the mark in assessing the
character, when they say that he starts off a bastard and ends a
bastard too. Actually, this is far more about unearthing other
qualities – not completely rejecting those 'bastard' qualities that he
begins the film with, but refining and diluting them, as he becomes
more and more adjusted to his past. He doesn't change, he opens his
heart and mind to qualities that he has been ignoring within himself.
You can see that other Max from the moment he opens the letter telling
him Henry is dead – but he tries to resist the feelings that are
clearly there, in large part because he doesn't want to face the fact
that he has let his Uncle down – and all of the guilt that is allied
with that.

The film is not the best film I have ever seen. The questions it asks
are fairly fundamental, but they aren't startling or especially thought
provoking.

But the film is highly enjoyable, from start to finish; and it's warm,
something that is pretty rare in films these days.

So, to end, clearly I am not in tune with the critics – but then,
increasingly that seems to be the case nowadays. I just think that I
see completely different films to them…