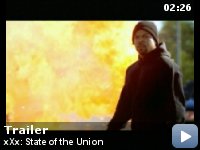 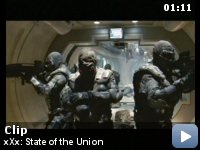 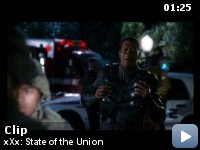 Taglines:
Prepare for the next level

With the exception of shooting scenes on the Lincoln Memorial and the Ronald Reagan Building, most of the scenes taking place in Washington D.C were shot on sound stages including the main chamber of congress which was 30ft high and 450ft long. It was so good that representatives of
The West Wing TV show even expressed interest in buying it.

Miscellaneous:
Deckert continually refers to Cobb as "Sergeant" when he is listed in the credits as "Lieutenant Alabama 'Bama' Cobb".

[after he kills Charlie]

Agent Augustus Gibbons:
See? I told you you should've killed that bitch.

Opening with an impressive first 7-8 minutes, this film moves into
cookie cutter territory at a frightening speed and continues to derail
any opportunity for the audience to engage in the ridiculous plot or
heavily computer generated action sequences.

Ice Cube will never be thanking the academy (he at times look like he
would struggle to play himself), but the Razzie committee should be on
the lookout for this up and comer, this type of dribble is the
cinematic equivalent of being run over repeatedly by a truck with the
stereo cranked up to 11.

The first xXx was at least assure of itself, popcorn action with the
acknowledgment that it was bang for buck and nothing more. State of The
Union takes itself far too seriously with a plot so absurd you swear it
was written by a focus group of 13 year old boys after a binge at
McDonalds. Action sequences are spaced every ten minutes or so as
bookends to move Cube onto the next dilemma, each new sequence becoming
further and further detached from reality (the final twenty minutes is
utter insanity that makes films like Charlie's Angels: Full Throttle
seem like documentaries). A sequence involving a train should be parody
material, not a serious plot device.

Women are treated as fodder to either slap around or grind up against
(sometimes at the same time) all to a soundtrack of nameless rappers
inserted at appropriate moments so that the white kids can know what
its like to be African American.

My only positive comment on this whole debacle are the cars used in the
film, not being a car enthusiast even I had to be quietly impressed by
the rides in this film. Also this film is under the 2 hour mark a sign
of a film that does know when its wearing out its welcome.