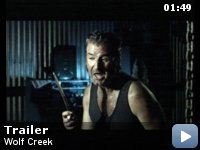 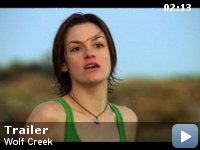 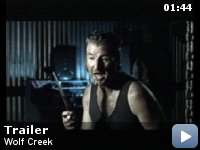 Stranded backpackers in remote Australia fall prey to a murderous bushman who offers to fix their car, then takes them captive.

Storyline
Just when you thought it was safe to go hiking in the bushes again…along comes Mick Taylor. Kristy, Ben and Liz are three pals in their twenties who set out to hike through the scenic Wolf Creek National Park in the Australian Outback. The trouble begins when they get back only to find that their car won't start. The trio think they have a way out when they run into a local bushman named Mick Taylor. Wait until you get a load of what Mick has in store for them. Their troubles have just begun.

Taglines:
How can you be found when no one knows you're missing

Director Greg Mclean originally wanted to shoot the film on MiniDV but director of photographer Will Gibson persuaded him to shoot it on HD instead, as it was felt that HD would capture more of the background landscape than MiniDV would.

Anachronisms:
The movie is set in August 1999, however, a Euro note and an 'Elizabeth Fry' five pound note are pinned on the wall in Mick's hideout. Euros and Elizabeth Fry fivers did not come into circulation until 2002.

Liz Hunter:
Thanks again for helping us out.

Liz Hunter:
Obviously it would be great to get going as soon as possible.


Let me preface this by saying that I did not view the trailer before I
saw this movie, nor did I really know anything about it. I do not know
if that will lessen the impact at all, but it might (not sure what they
show in the trailer).

Writer/producer/director McLean shot this movie on a digital HD handy
cam, giving it an amateurish feel – but it is far from amateur. The
first 45 minutes feel like a completely different movie than the last
hour or so, and that is one of this movie's many strengths. McLean
spends time letting the audience get to know the three main
protagonists, who are Liz, Kristy, and Ben. They girls, who are both
from Britain, are nearing the end of their Australian excursion, and
they set off with their new Aussie mate, Ben, on a road
trip/backpacking trip across the country.

McLean has an eye for the unsettling, even in the mostly warm first
minutes, and he uses the stark colors and landscapes of the deepening
outback to give it a slowly building sense of dread. Their are a few
ominous signs – a dog barking viciously at something off screen, a
rather unpleasant encounter in an out of the way gas station, and an
awkward conversation about UFOs and aliens. I knew it was a horror
movie, and the slow buildup is a wonderful way to create true and
genuine tension.

Another thing that creates tension is the fact that the three main
characters are so well fleshed out, and feel so real, that the audience
begins to care for them. Knowing it is a horror movie, we know that
something is eventually going to happen, and beginning segment, in its
quiet, tender moments, make you wonder when that is going to happen.
It's all part of the extremely good package.

Another thing to like about this horror movie is that the characters,
for the most part, do not do any stupid things or horror clichés;
rather, they are trying to survive and they do respond in believable
ways to the horrors around them. And when those horrors finally come,
after an particularly amazing segue (going to sleep…sunset…waking
up hogtied), they do not let up.

Part of the criticism of this movie is that it is realistically violent
and brutal, but it's a juxtaposition from the first half. It's also a
juxtaposition of civilized vs. uncivilized, and the sterile,
uncompromising landscape of the Outback is the perfect place for this
to occur. There wasn't an over the top amount of gore, which is good,
because the cruelty of what the three endure is enough to churn
anyone's stomach. However, the movie is not just simple exploitation –
far from it, actually. It's about that deep-seated fear of the unknown,
and what could happen in an unfamiliar place.

McLean, while following a somewhat formulaic idea, stays far away from
the usual stupidity. The fact that we have grown to care for the three
main characters is why the second half is so effective, because there
are things that happen to them that are so brutal that you feel it
right with them.

'Wolf Creek' is one of the few good/great horror movies I've ever seen.